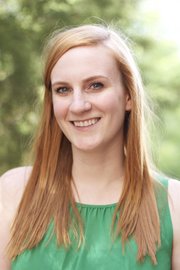 They are such tiny words, really. "I do." Could they be any smaller? Two words spoken by two people. Add 13 more--"By the power vested in me, I now pronounce you husband and wife."--and a signed document, and boom! Married.

So simple. So why does it take a village--nay, an army--to do the damn thing?

I'm not sure if you've noticed, but women can get a little worked up over weddings. In fact, I don't know if there is anything that turns sane women into frothing, frenzied, frantic lunatics faster.

I know from experience. Last May, I married my best friend. I am self aware enough to admit that I'm the kind of person who turns things into An Ordeal, and wedding planning was no different.

I admire the brides and grooms who are able to set a budget, make decisions easily and be completely zen about the whole thing. I respect those who wed with just a few close witnesses, or elope or somehow else avoid worrying about what they "should" do.

Unfortunately, I was not exactly that bride. I fell prey to the pressure modern American society puts on this one day.

Of course, it's not just one day. It's THE day, or so they tell us. It is The Most Important Day of Your Life. It is the day that everything must be utterly, all-consumingly perfect, and you'd better be willing to do what it takes to make it so. This is the message continually shoved down the throats of the female population by Martha Stewart, The Knot, and approximately 7 billion wedding-related websites, blogs and television shows.

On the TLC channel alone, there are at least seven wedding shows, including four different iterations of "Say Yes to the Dress," where consultants regularly turn up their noses at any bride who dares to come into the salon wanting to spend less than $2,500 on a dress they will wear for about 12 hours.

Of course, we can't leave out the grand dame of all horrifying wedding shows, "Bridalplasty," which tells women that their marriage will be utterly doomed if they don't take drastic, surgical action to perfect themselves. Forget that a man asked to spend his life with you, even with that nose! He's crazy! Trust us, there's nothing a man loves more than not recognizing his fiancee's face or body as she walks down the aisle to become his wife! There's no point in even getting married if you are going to do it with more than 6 percent body fat!

The destructive mentality stretches beyond TV, though. It feels like the minute you slip that ring on your finger, the world bombards you with reasons why your body is flawed. Facebook and Google Ads and any other Big-Brother-esque marketing programs begin to present ads promising you the best way to "lose weight before the big day!" Bridal magazines instruct you on how to find the best dress to hide your body's imperfections rather than the one to celebrate your body's assets. Well-meaning friends and strangers share the secrets of how their friend Sarah got "so skinny!" for her nuptials.

The wedding world tries to convince you these things are vital. And while you are busy trying to figure out if you really do need a nose job in order to be legally wed, The Knot helpfully sends emails every day to remind you what a failure at wedding planning you are. "Hi Kathleen, it's 278 days until your wedding! If you haven't bought your dress, bought a second dress to wear to the reception, learned calligraphy, hired at least two wedding planners, sampled cake, booked your entire honeymoon, made a manicure appointment and lost 12 pounds, you're late! Also, pewter is the new gray, which was the new black. Also, if you play 'YMCA' at your reception, you are tacky. Cheers!"

It is easy to scoff and laugh at the absurdity of the vain and overly intense. It's easy to judge. But the truth is, wedding planning made me do, feel and say things I never wanted to. It made me care about things that I felt silly caring about.

The wedding world whispers seductively in the form of expensive letterpress invitations and lush peonies and red-soled Louboutin shoes, and suddenly you're convinced you want--no, need--elaborate bouquets even though you originally planned on simple and inexpensive florals. Suddenly you are jealous that a friend used a decor idea first, or worried your dress won't measure up to all your peers' Pinterest boards.

These are stupid emotions. But that doesn't change the fact that they are very real and present emotions. It's exhausting thinking about the myriad ways people can disapprove of your wedding-related choices. Aren't you a little young? Is your diamond big enough? On the other hand, is your diamond conflict-free? Are you spending too much? Are you spending enough? Did you invite so-and-so?

Not to mention the struggle to bring together my feminist and equal-rights ideals with childhood romantic fantasies, which is a topic for a whole other conversation on weddings (suffice it to say, I love that my husband asked my father for permission, but I don't love that I love it...).

I've been to a number of weddings in the past few years, ranging from lavish affairs involving limos, fine catering and a huge rehearsal dinner to extraordinarily simple backyard ceremonies, with homemade quilts on picnic tables and dinner made by friends and family--and everything in between. One celebration, thrown by two families who must have more money than God, featured a live elephant. Each of these weddings was different, but each touching in its way.

It's important to remember that while weddings might bring out the worst in some people (I'm looking at you, Kim Kardashian, et al.), they can also bring out the best in others. Weddings are ultimately all about joy, love and dancing like crazy for three hours. It's cheesy and cliche, but so is a lot about weddings. Family, friends and community come together to celebrate two people making a very serious and meaningful promise. Some of the best times of my life have been at my friends' weddings, and I hope they feel the same way about mine.

It's now been eight months since I survived the Ordeal. Looking back, I wouldn't change anything. Sure, it was 95 degrees and God knows how humid, and there was talk of sweat in some uncomfortable nether regions from our guests. Sure, I didn't quite have Michelle Obama arms. Sure, I waited too long to print programs and ended up spending too much money on them.

But when my husband said his vows to me, promising to always be there for me and to always feed my cat; and when I put a ring on his finger for the first time, crying; and when we hugged all the people who came out and sat in that 95-degree weather; and when we danced and ate and laughed until 4 in the morning with people who love us ... none of that other stuff mattered.

A wedding is a big day, but it's still just a day. It's easy to forget that, to get so wrapped up in the one day that you forget the thousands that come after it. At the end of that day, you're married. Which is actually the point of a wedding, you know, starting a marriage? And marriage is the greatest, hardest, most rewarding, fun adventure I've been on yet.