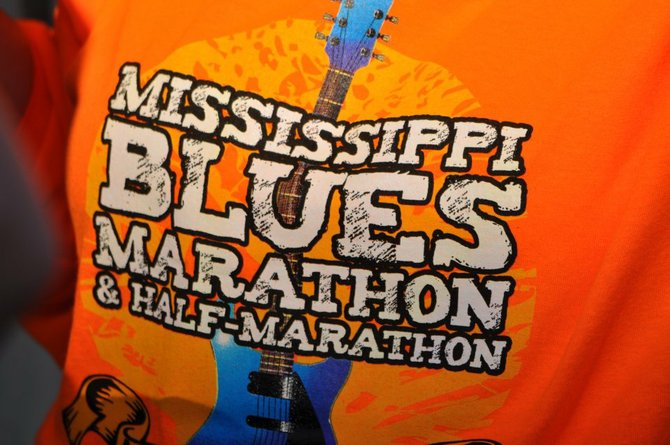 This weekend, thousands of marathoners will descend on Jackson with blues in their head, heart and step for the Mississippi Blues Marathon. Photo by Trip Burns.

This weekend, thousands of marathoners will descend on Jackson with blues in their head, heart and step for the Mississippi Blues Marathon.

Race director John Noblin believes the marathon organizers have built a running experience that is culturally unique. "The theme plays into so many different parts of the event," he says, citing the live music at every venue, the giveaways and the design. "The Rock 'n' Roll marathons, there are 25 of those. The same company owns them all, and you can pick one up and put it down somewhere else. There's the rock 'n' roll in New Orleans and in San Diego, but it's all the same. I think we've created a pretty cool niche. People like our package and the whole look and feel and sound of it. It's almost like a multimedia experience of a marathon."

Runners will participate in either a full marathon (26.2 miles), half-marathon (13.1 miles) or a team relay, typically consisting of five people (four members run five miles each, and the last runner completes 6.2 miles to finish the race). Wheelchair racers will also take the course, and kids are invited to participate in an afternoon fun run.

Today, from 9 a.m. to 7 p.m., a race expo at the Jackson Convention Complex is open to the public, with live music all day. Tomorrow, things really kick off when the race begins at 7 a.m. downtown, near the intersection of State and Capitol streets.

The route will take runners up State Street, past Millsaps College and the University of Mississippi Medical College, through a bit of Fondren, on Old Canton Road, back to downtown and just brush up against Jackson State University before ending where the runners began. Finishers don't receive a standard round or square medal for crossing the finish line, though--the finisher's medal is shaped like an electric blue guitar, complete with pick, befitting the race's blues title.

Organizers call the event "a big street party" as well. Music kicks off at the finish line as soon as the runners take off, beginning with Patrick Harkins and continuing until the afternoon with Bill Abel & Cadillac John Nolden, The Juvenators, and Hezekiah Early & Elmo Williams. Live music will also spur racers on along the course, with mini concerts every five miles or so. Several local restaurants are offering special discounts to race participants.

The party continues well into the evening, with a Blues Crawl that stops at Underground 119, Ole Tavern, F. Jones Corner, Hal & Mal's, The Penguin and other local hotspots.

The Blues Marathon is a big attraction for Jackson. The Jackson Convention and Visitors Bureau says the race brought close to $500,000 into the local economy last year, the Associated Press reports. This year, with around 3,000 entrants from 467 states and 10 countries, the marathon is the biggest so far. Entries sold out last month, and this is the third year in a row the race has sold out.

The impact is beyond financial, however. "To me, as a lifelong Jacksonian, the (economic boost) is important, but what I think is more important is the people from all over the country who come to Jackson and leave saying positive things," Noblin says. "We hear people all the time saying things like, 'I've run 57 marathons and these are the friendliest volunteers I've ever seen.' Or, 'This is the best food I've ever had at a marathon.'"

Noblin wants the running community across the country to find the best of Jackson when they arrive. "We get people who come to Jackson this one or two days in their whole life. They run the race, cross Mississippi off their list and might not ever come back," he says. "But we can make an impact on them and change the way they see Jackson or tell other people about it."

The race, which began in 2008, is a Boston Qualifying course, certified by USA Track and Field. This year, the Road Runners Club of America named the Blues Marathon the 2013 Southern Region Championship Marathon.