A massive tractor tire, nearly five feet in diameter and weighing around 100 pounds, waits silently on the grassy clearing. It looks innocuous—for now. Later, 14 people will confront the tire, to hoist and flip it. The tire is waiting to bring the pain.

Flipping tires is just one part of a new Badass Bootcamp Terry Sullivan is offering through his fitness company, liveRIGHTnow. Each weekend for four weeks, participants get together for an hour and a half of nonstop activity. Fourteen members divide into two teams and let Sullivan and his liveRIGHTnow crew whip them into shape. 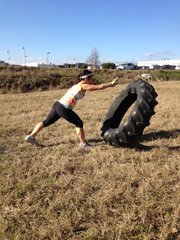 Flipping tires is one of the physical activities at liveRIGHTnow’s bootcamps.

They follow a set schedule, doing running drills for the first half-hour, including quarter-mile jogs, quarter-mile sprints and a mile of alternating between 30-second sprints and 30-second walks. "So that kind of gets everybody loosened up, gets some good cardio in," Sullivan says.

The second half hour is divided into two circuits. "One circuit is doing various tire throwing--so, side throws, overhead throws ...We call it throwing up doughnuts, where you pick up the tire and put it over your head and throw it forward," Sullivan explains. For the throws, they use car tires much smaller and lighter than the tractor tires. The other circuit includes burpees (also known as squat thrusts), tractor-tire flips and pulls, shipyard rope up-and-downs and over-unders, and hill climbs. Each circuit lasts about 15 minutes and then the two teams trade places.

Each week ends with a mini team-based competition, leading up to a big competition between the two teams on the fifth week of the camp.

The camps are a big part of the growing liveRIGHTnow organization and community. Sullivan started the company in May 2010 and began taking clients for one-on-one personal training and weight-loss coaching. "I saw a big need for people not only to exercise but to have lifestyle changes down here," he says. "So that was the  initial approach."

Last fall, Sullivan and a group of close friends began training together for a 200-mile race in Tennessee, and his clients wanted to be a part of exercising as a group. These days, liveRIGHTnow organizes weekly hill runs in Fondren, as well as a two-mile FondRUN group jog in conjunction with Fondren After Five.

Sullivan sees a big difference in the mentality of a group that exercises together rather than individuals going it alone. "When I see people work out (together), they are smiling and laughing as opposed to looking miserable, because they are doing it with other people," he says. "I also think it's definitely an accountability factor. If you know that someone's going to be there looking for you, you're more likely to go. A lot of time, we go to the gym, we plug in our headphones, and zone out and watch television like zombies. But when we run hills, we get together, we throw on our reflective vests, we laugh, we talk,  and we play."

Working out with others and outside is a major benefit of Badass Bootcamps.

The community building goes beyond just exercise, as well. "It helps people share ideas and recipes. A lot of my clients that participate are women that have children. They can talk about how to keep their kids healthy," Sullivan says.

This is the second Badass Bootcamp offered by the organization, and Sullivan plans to continue offering bootcamps every other month as long as folks are interested. liveRIGHTnow also has a training program planned for the Warrior Dash, an obstacle-course 5K hitting Jackson April 20, and a kids camp at Jackson Academy in May. For more information on liveRIGHTnow bootcamps or personal training, visit liverightnowonline.com.