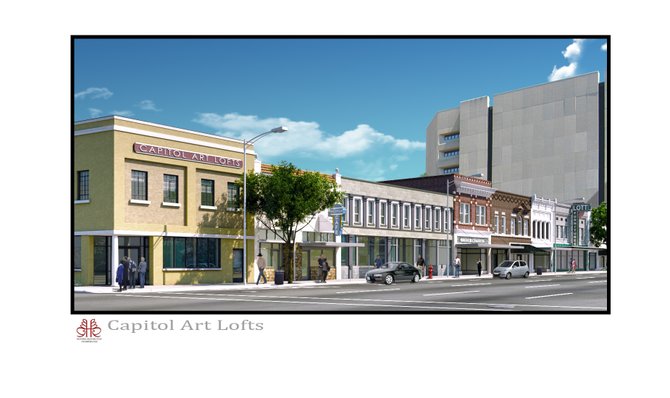 Take a couple of enthusiastic young Jackson entrepreneurs and put them together with an established urban-development company and what do you get? Well, you might get some fabulous low-cost housing for artists and gallery space in the capital city's downtown.

Alan Henderson and Matthew Bolian make up the enthusiastic part of the equation: BlackWhite Development. When they looked at the block of decrepit shops across the street from the King Edward Hotel, they saw opportunity, not decay.

"It was just a dream to do a downtown development," Henderson said.

BlackWhite took an option to buy the buildings on the block, several of which are empty, then Henderson drew up detailed plans of their vision while Bolian worked the numbers and wrote a proposal. The partners presented the package to investors that they believed could help them bring their vision to fruition.

"I saw the potential," Henderson said. "It's rare in downtown that you have that many intact, historical buildings. ... It really speaks to the historical fabric of the city."

New Orleans-based HRI Properties, the company that helped rehabilitate the King Edward Hotel and the Standard Life Building in Jackson, stepped up. With some skin already in the city, HRI was a natural.

"We really wanted the buildings across the street (from the King Edward) to contribute to the revitalization that we started," Joshua Collen, HRI's vice president of development, said. "This is the right fit that we think is finance-able and achievable."

The partnership created a new vision: Capitol Arts Lofts in the 200 block of West Capitol Street. Plans include 31 low-cost loft apartments that will rent for $550 to $670 per month, a fitness center, business center, and shared studio and gallery space. Preferred tenants will be working artists; however, all will be welcome to apply.

"In addition to the living space, we try to create some common, collaborative space--a gallery, a work area, things where people can come together, share ideas," Collen said. The business center would provide the residents computers loaded with specialized software to create websites and market their creations, and would hold software trainings three or four times a year, he said.

The idea is to create a downtown core of creative people to add a hip, fun element to a downtown in need of fresh, imaginative energy. The fact that the developers plan to retain many of the buildings' historic elements--windows, high tin ceilings, mosaic floors and even retail signage--allows it to blend into the city's landscape while adding a hip, funky element to the whole project.

HRI has taken the lead in the project, providing the two young BlackWhite partners a unique learning experience, while giving HRI "boots on the ground" in Jackson.BlackWhite has taken on local needs from analyzing the market to checking measurements to working with the city bureaucracy.

"I see us changing the face of Jackson, and by changing, I mean helping Jackson evolve, making the city what we all know Jackson can become," Henderson said about BlackWhite's commitment to the city. He and Bolian, a former intern at the Jackson Free Press, have passions for, smart, holistic urban development that will entice younger Mississippians to stick around or return, stemming the tide of the state's brain drain.

Because the Capitol Art Lofts will occupy a historic area, contractors will have tight guidelines to follow. The development is eligible for federal historic tax credits and low-income housing tax credits, which will make up about $7.6 million of the expected $10 million to $12 million in costs.

The condition of the buildings isn't great, but having experienced the King Edward's state of dilapidation and with extensive experience in other historic preservation projects, Collen doesn't see any structural issues that would put a damper on the project. The team hopes the Capitol Art Lofts to be ready for occupancy in December 2014.

"We don't see any challenge with existing conditions," Collen said. "... Given the kind of challenges that we had at the King Edward, these are not in that same ballpark of difficulty."