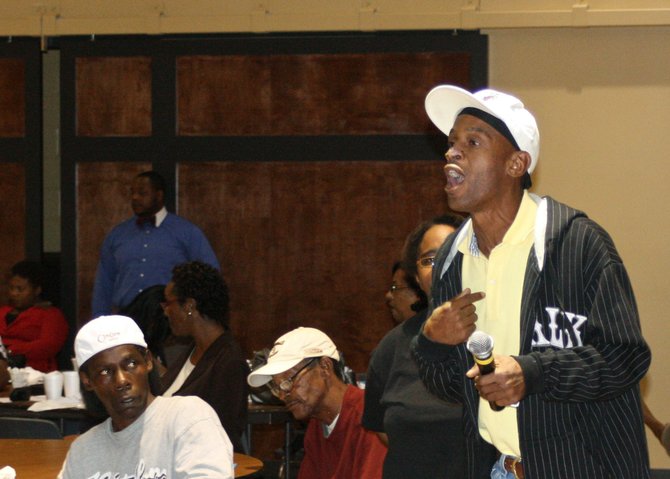 Michael Hunter, a homeless man, said he is tired of eating at Stew Pot. He wants a job so he can feed himself. Photo by Jacob D. Fuller.

Michael Hunter is homeless, and tired of depending on charitable organizations and churches to feed him.

At a conference on homelessness at Galloway United Methodist Church Thursday morning, Hunter told the crowd that he wants to work.

"I appreciate when the churches feed us, but where are the jobs? We need jobs so we can feed ourselves, put our own food in our mouths," Hunter said as the crowd clapped and cheered. "We get so complacent out there at the Opportunity Center (and) Stew Pot, because we depend on them each and every day to feed us. We don't need to get complacent out there, we need to get out there and work. We need to have jobs to provide for ourselves and for our kids."

Citizens from the Jackson area--both homeless and not--gathered at the event, which Partners to End Homelessness and the city of Jackson hosted, to hear from formerly homeless citizens and speakers. They discussed what Jacksonians can do to end homelessness in the city.

When there are opportunities for jobs, most homeless people do not have access to transportation to get to where they need to apply, Hunter said. Instead of providing meals every day, organizations and churches need to present job opportunities to homeless people, and help them successfully apply for work.

Robert Nettles used to be homeless, but thanks to U.S. Housing and Urban Development funds for homeless veterans provided through the Jackson Housing Authority, he now has a place to call his own.

"It's a joy for me to get up in the morning and go empty my trash, mop my floor, make up my bed, to be able to look out my window and say, 'This is where I live,'" Nettles said.

"I agree with you, there is a dire need for employment," Nettles said to Hunter. "I'm seeking employment as I stand here."

A common theme among the speakers was drug and alcohol addiction. Nearly all of them said they suffered from addiction and substance abuse while living on the streets. Danny Adams said he ended up on the streets 14 years ago because of his alcohol and drug addiction.

Adams said he received a $400 check from his job every Friday, but would be back at the shelter on Monday to eat because he drank and smoked away his money over the weekend.

Hunter believes it is important for people not to assume that addiction is the reason people are living on the streets, though.

"Some people arrive at drugs because that's what they use to deal with their homelessness," Hunter said.

The conference was the final part of the city's Annual Project Homeless Connect Week. The city hosted a service fair at Smith Park Tuesday, where volunteers helped homeless people apply for birth certificates and social security cards and provided services such as haircuts, health screenings and meals.

I hope Mr. Hunter can find himself a job.