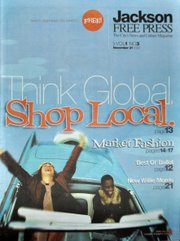 When the Jackson Free Press launched in 2002, one of our primary goals was to help strengthen locally owned businesses. We knew that the authenticity of a community—and, thus, its likelihood to keep residents and attract news ones—hinges in no small way on the variety of local shops and restaurants that give the city its flavor.

And let's be honest: In 2002, you couldn't find much of a local movement in Jackson. Many businesses had moved to the suburbs, and big-box chain stores dominated shopping time for many residents. Heck, there was only one McDade's Grocery—the original Maywood Mart location—and only one real farmers market.

The JFP set out immediately to seed a "locavore" movement in Jackson. The cover package of our issue No. 3, published Nov. 21, 2002, was themed "Think Global, Shop Local," and asked readers to "vote for your community with your dollars."

I wrote an essay about the wisdom of caring about the world beyond Jackson ("think global") while investing dollars in the local businesses that would held rebuild the city's future ("shop local").

"[I]f all us Jacksonians want an active retail and entertainment base in the heart of our city badly enough, it will happen," I wrote then. "But we can't afford to wait around for it; we must go make it so. That means supporting our own: buy local gifts this holiday, eat in local restaurants, seek out the wares of local artists, support businesses' attempts at longer hours."

The fashion shoot included a diverse group (including now-Hal & Mal's manager Jane Halbert) wearing fashion from local boutiques and shopping at the Greater Belhaven market, which was then in the "Jitney 14" parking lot on Fortification Street. (Now it's one McDade's four local stores and the vendors have moved to other markets.)

Back then, even Fondren wasn't what it is now: Ron Chane had a fabulous store there, Que Sera Sera and Walker's Drive-In were open, and Rainbow Whole Foods was the heart and soul of what was possible, as well as the small strip that appeared in "The Help" recently. Fondren Corner hadn't happened, yet, nor had the artists moved in. The area's best days were ahead.

Over the decade, we've never backed off on our campaign to get people to "spend local first." We always feature items available at locally owned businesses in our shopping and gift guides. We've been thrilled to see more businesses and even corporate-owned media (ironically) picking up the meme.

Now, the locavore and local-food movements are trendy across the nation, including in Jackson. We encourage you to keep spending your dollars locally first to keep more money, residents and tax base in Jackson.

QUIZ: Are You a Locavore?