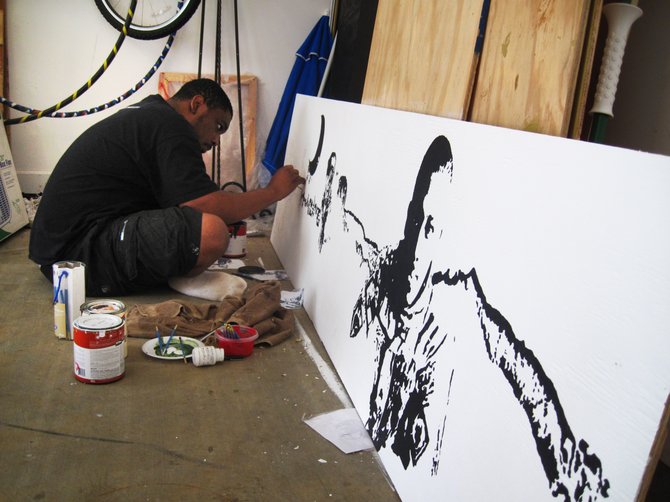 Charles Brice works on a panorama painting of his experiences in Afghanistan. Photo by Kathleen M. Mitchell.

Talamieka and Charles Brice met in drawing class. Competitiveness in the classroom eventually grew into a marriage and partnership in Brice Media, a photography and graphic art company the couple co-owns. Art has long been a part of their lives and their relationship.

Charles, 33, was deployed to Afghanistan with the Army as a photojournalist in 2008. He remained there for 10 months. After he returned and was discharged from service, he and Talemieka, 31, began telling their individual stories through art, and "Combat Boots and High Heels," a multimedia art exhibit focused on military life was born. The show features a combination of photography, graphic art and large-scale paintings. The couple also plans to write a book about their experiences featuring the art they've created.

When did you find out you were called to deployment?

Charles: On my birthday. ... My commander called me and wished me happy birthday, and he was like, "And another thing, we just got word that we're getting deployed."

Charles: So while all this training and stuff was going on (to prepare to deploy), you have to make preparations with your family--your finances, your family matters, emotional stuff. You have to get all of that out of the way because it is considered a distraction to the Army. And it was a time that I would say a soldier would make peace with himself before he goes off to war.  With her, I never really realized her side of the story until years later. It seemed like it was all about me, me, me, me.

Talamieka: Just like he said, before he leaves, there is just like a back and forth, going to training, then home, then gone again. But what made me really realize that things were changing significantly was he fell asleep during those three days (at home between training sessions). He was fully dressed, shoes, everything was on, and all the lights were on in the house. And I was kind of laughing because I thought it was funny that he fell asleep, but then when I went to wake him up, I startled him, and he went to reach for what would have been his gun. So that was the really heavy part of, "This is really happening, this is changing, and that man that I married is becoming someone else." I think that's what a lot of wives deal with, they don't come back the same, and you're not the same. Because you grow anyway while you're deployed.

And while he was abroad, how did you cope?

Talamieka: I (tried to be outwardly strong), but it's a mask. And that's what a couple of pieces (in the show) deal with. Charles and I both agreed that as a soldier, as a wife, a lot of times you just put on a mask. The only thing I had that someone would wonder or know that I had a deployed husband was because I wore his dog tags.

Charles, what were your experiences in the field?

Charles: There are positive things along with the negative things about being deployed. The positive is the people you meet. Some situations you go through are positive because it shows you the culture, and it opens your eyes. ... The things I saw, especially the way they treat the women ... It made me value her a lot more, and that's what made me actually start thinking about what she's going through, over here.

What was the readjustment like when he returned home?

What feelings came out as you started the art for the exhibit?

Talamieka: It's just the heaviness of it all. That's the one thing I've been surprised at in the pieces we've created. The art that we do when we do families and children is very happy and bright and vibrant, even with our graphics. This show has been heavy. Even the medium that we're using is heavy. Our pieces are mainly wood, and they're very heavy.

What have you learned about one another in doing this artwork?

Talamieka: This show has truly been very therapeutic, because when he came back there was an adjustment period for a time and there were anger issues and post-traumatic stress. And what I didn't realize is that as his wife, I had post-traumatic stress myself. Like it was only three months ago that I could stop waking up and calling his name.

See "Combat Boots and High Heels" at the Mississippi Arts Center (201 E. Pascagoula St., 601-960-1500) through Sept. 26. The show is free, although the Brices are accepting donations to the Mississippi Military Families Readiness Group.