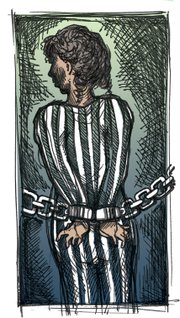 A young student left her class to use the bathroom. She didn't have her teacher's permission, even though she had asked for it. The girl had a bladder problem, and was afraid she would have an accident and soil herself. The teacher refused to let her go, but she went anyway.   As a result, police arrested her and put her in a detention center because she disobeyed the teacher.

If such a scene happened only once, you might dismiss it as an anomaly, but it's the way the youth-justice system in Lauderdale County has been working for years, said Jody Owens of the Southern Poverty Law Center, which sued the county over abusive practices at its detention center in 2009.

On Oct. 24, after an eight-month investigation and two months of unsuccessfully trying to negotiate with the defendants, the U.S. Department of Justice filed a lawsuit against the county, the city of Meridian, two county youth court judges, the state Department of Human Services and the Division of Youth Services, accusing "unlawful conduct through which they routinely and systematically arrest and incarcerate children."

"The lawsuit makes clear that children have constitutional rights and that the Department of Justice will do all in its power to protect these rights," said U.S. Deputy Assistant Attorney General Roy L. Austin Jr. during a press conference announcing the lawsuit.

The DOJ alleges that the defendants operate a school-to-prison pipeline. They regularly violate children's constitutional rights by arresting them without probable cause, denying them effective counseling or hearings, and then "imposing disproportionate and severe consequences, including incarceration." The offenses--some as minor as wearing the wrong color socks or being late for class--result in police automatically handcuffing and arresting the kids at school "regardless of whether information is conveyed regarding the allegation," or whether the "crime" warrants arresting  the child.

The suit states that the county's violations "are particularly grievous and pronounced for black children and children with disabilities in the Meridian Public School District." The city's overall African American population stands at 62 percent, according to the DOJ, yet the school district's enrollment is 86 percent black. From the 2006-2007 school year through the first semester of the 2009-2010 year, every one of the students "referred to law enforcement" and all students expelled from school in Meridian were black.

"Kids of color were being disciplined more harshly for doing the same school violations that kids not of color would do," Owens said. "And those kids would ultimately find themselves in the detention center more and more often."

Disabled kids were punished for their disabilities, he said. If a child was hyperactive, for example, that behavior could result in incarceration. "It's a real sad component of this whole ordeal,"  Owens said.

Owens characterized some of the actions of the youngsters that resulted in arrest as "normal, kid-like behavior."

"They knew these kids were not committing criminal acts," he said.

"Once the kid had been labeled as a troublesome kid, as a kid that acted up in class, ... (school authorities) choose to push them out of the classroom directly into the detention centers. No stops." As a result, he said, many kids would fall behind in school and ultimately drop out.

The system continues its illegal actions during the intake process, the DOJ suit states, when the officer orders temporary custody of the child to the county without a hearing, without advising the child or his or her rights, and without a defense attorney. The county uses, "almost exclusively," a single public defender, who gives "only minutes" for a consultation and refuses to meet any time other than just prior to a hearing in the county's youth court--which could be several days after the child's arrest.

In February, Lauderdale shut down its youth detention facility citing its legal battles with the SPLC. At the time of the investigation, Federal Judge Carlton Reeves wrote that the facility "has allowed a cesspool of unconstitutional and inhuman acts and conditions to germinate, the sum of which places the offenders at substantial ongoing risk."

The county now ferries its youthful offenders to Rankin County, 80 miles from Meridian, where they don't have access to their attorneys, counselors or, frequently, their families.

"What we are trying to do is to fix the problem and not the blame," he said. "Unfortunately, the defendants do not feel the same way."

Owens says the entire system--from the schools to law enforcement to judges--share blame for the state of Lauderdale's youth justice system. "Every safeguard in place failed these kids," he said.

"... What's most disappointing in this, what's most shocking, is that the kids thought this was normal."