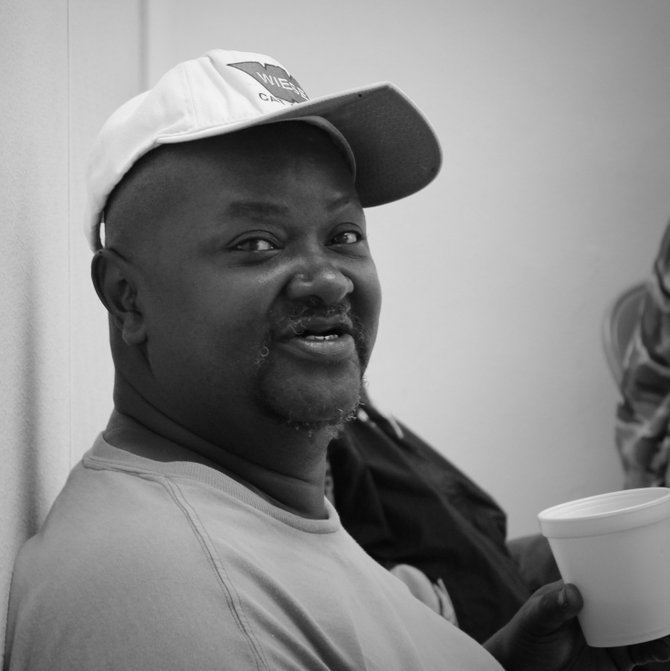 For many such as Carl Hutton, the Opportunity Center provides vital services. Photo by Courtesy Piko Ezwoodie

Jeffrey Howell, affectionately known as Hill Billy, is homeless. Right after 5 a.m., you can usually find him walking up Gallatin Street with more than 30 others who are heading toward the Opportunity Center on Amite Street. This is their daily commute. Columbus Bolton is there waiting to check them in. After Billy sets his bags down and uses the rest room, he tries to catch up on sleep before he heads to breakfast and his GED class.

Wayne Painter and Billy Kidd walk up to the Opportunity Center from Robinson Street around 6 a.m. to wait for their boss man. They aren't homeless, per say--they stay with Billy's daughter. But, working as laborers on construction sites, they can't rent their own apartment because they seldom are able to consistently earn money. When they reach the OC, they use the phone inside to call their boss and let him know that they are ready to be picked up. "He didn't pick up, man," Painter tells Billy with worry in his tone. It might mean that they don't work today, which might mean no money.

Carl Hutton, who spent the night in an abandoned building down the street from the Opportunity Center, walks over around 7 a.m. He goes into the bathroom to freshen up and then steps outside to join an already lively conversation. He doesn't plan on going anywhere today, except to Stewpot up the street for lunch. He has with him, as he always does, a couple of plastic bags full of snacks that he's accumulated from church groups that come around. When he reaches into it to get something to eat, the guy sitting next to him asks for something in his bag. He initially says no, but, after a little banter, he gives it to him. "OK. Here you go. Can't see a man go hungry." "Here," he says to me, "you want something, too? You want the chocolate cream pie?" I politely decline. "But I'll take that water." He hands it to me.

For those who are homeless, the Opportunity Center, the only day shelter in Jackson, is home. It is where they get their mail, do laundry, take showers and watch the news. "The face of homelessness is really changing. It's not just those who are mentally ill or addicted to drugs. It's also people who have been hit hard by the economy. Many Jacksonians are one paycheck away from being homeless," says Shelly Hinds, the director of Partners to End Homeless--a non-profit organization that supports homeless service agencies, like the Opportunity Center. "So the services provided at Opportunity Center are very important."

Heather Ivery, the center's director, says transportation is one of the center's biggest needs. It needs more funding for bus passes so that people can make it to job interviews and, most importantly, doctor's appointments. "The best-case scenario would be to buy a bus so we can take them where they need to go."

On Oct. 25, Partners to End Homelessness is throwing a '70s-themed fundraiser for organizations like the Opportunity Center. The '70s Disco Ball starts at 7 p.m. at Duling Hall in Fondren. Everyone is asked to dress in his or her best '70s attire, though it is not required to enter. Prizes are on hand for the best costume. The event features door prizes, a silent auction, cash bar and an iPod raffle. All funds raised go to Partners to End Homelessness to further its efforts to support homeless service agencies in the metro area.

Event tickets are $35 and available through Partners to End Homelessness. For more information call 601-213-5301, or email [email protected]