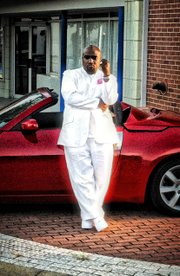 Born in Jackson in 1974 to renowned Malaco recording artist, the Rev. Benjamin Cone Jr. and his wife, Louise Dixon-Cone, Benjamin Cone III is the gifted and rightful heir to their gospel and music ministry. From an early age, "Benji" was inspired and encouraged to sing, study and seek his place in the tradition of musical worship.

As a child, Cone was surrounded by gospel and blues. His father was the spiritual adviser for Malaco Records and also served as on-the-road pastor for the Mississippi Mass Choir and Mississippi Children's Choir. Best known for his spoken-word "sermonettes," his father passed away Sept. 16, 2012, after an extended illness.

"My father was a legend," Cone says, his voice warmed by deep love and respect.

Cone III is well on the way to becoming as much a legend as Cone, père. In 1997, after a period of soul-searching prayer and fasting, Cone was called to start his own group, and the choir, aptly named Worship, came into being.

"We started as an a cappella group because I didn't play any instruments," Cone says. "I had 12 singers to start. Within six months, we had 25." Over the years, Worship has expanded to 50 singers and a full band that includes Benjamin's 15-year-old son Christian Jean-Michael, who plays the drums. The group has recorded and toured extensively, backing gospel greats such as Dorothy Norwood and the late Rev. James Moore.

Benjamin Cone III and Worship's single, "The Race," is currently available on iTunes and Amazon. The group's debut album, "When Praise Meets Worship," is scheduled for release next spring.