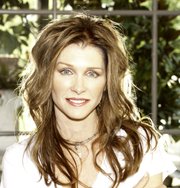 It took a lot of closed doors for Amy Head to get where she is now. Her original plan was to become a doctor, she says, but that all fell apart. “You know how you’re going to grow up and do this, have your business plan and just follow it, and everything’s real neat and tied up in a box with a bow on it?” she says. “Just the opposite of that. Everything unraveled. … I was lost, I didn’t know what I was going to do and had to sort of pull myself together.”

Head began working jobs in retail, office jobs, waiting tables—just trying to figure out what was next—and eventually found her way into modeling.

“That sort of got my mind thinking in this way, about the power of makeup,” she says. It was that power in the wrong hands that set her on the path to becoming the cosmetics company owner 51-year-old Head is today. “I had a hired makeup artist just wreak havoc on my face, and I said, ‘This won’t work, I’ll do it myself,’” she recalls.

Head began to study the art of makeup and quickly established a reputation as a commercial makeup artist. She grew up painting and experimenting with color and fashion, so she found she had a knack for the job. “Just innately, I am talented with color, but I thought everyone was,” she says.

After 15 years doing makeup and modeling, Head branched out, with her husband, Harold, and a laboratory—the same one that launched Bobbi Brown’s makeup line—to create her own distinct line of makeup products. That first launch, over 25 years ago, was small.

“It was maybe eight eye shadows, four blushes and one formula foundation that I loved for all skin types, a powder… basics that I knew that I could use to make the face come alive for just about anyone,” Head says.

“The most consistent tip that is relevant to every single feature that you embellish with makeup is to sketch, to feather it on, as opposed to dragging your pencil, dragging your brush, dragging your sponge across the skin. If you pat and dab and sketch and feather, then you will be way more in control of the quality of the look.

“For example with foundation, don’t rub it like it’s lotion, like something you’re trying to rub in, but feather it on—it takes 50 percent less. To apply some lipliner to make the lips look shaped and crisp against the face, the last thing you want to do is drag it across because it looks unnatural, unfashionable, versus that elusive edge.”

The keyword for the Amy Head aesthetic is “natural.” Head believes makeup should make features appear more beautiful without calling attention to the makeup itself. “That was where my study began, and that’s what I still do today, and what I teach my girls, my staff to know how to do,” she says. “Like make the eyes appear bigger, but you can’t tell what happened; make the skin appear more radiant, but not know what was done to do it.”

Head’s products reflect that mentality. “The most important thing is that it not just be easy for me to use, but that it be easy for the common person to use,” she says. She wants her colors to be “nameless” on the skin. A blush, for example, could have a little pink, a bit of coral and some slight brown shades in it.

“You can’t really say what it is. That means it’s natural on the skin.”

Around 11 years ago, Head went through perhaps the most career-shaping closed door of all. The brand was in talks with high-end department store Saks 5th Avenue to close a deal launching Amy Head cosmetics as an exclusive makeup line in its anchor store. In addition to her product and concept, Saks liked that Head was southern, that she could be photographed and worked well on-screen.

But at the final meeting to close the deal, Saks refused to sign the non-compete agreement Head had sent to the store’s lawyers to get approved. The non-compete meant that Saks could not use Head’s concept without her. When they wouldn’t sign, she walked away.

“So we drove home saying, ‘We’ll do our idea ourselves,’” she says. “And that’s what you get when you go into the Amy Head store, a version of what I was designing to be boutiqued out in the main Saks 5th Avenue stores, the way I train (the in-store makeup artists) and everything.” In addition to the flagship Amy Head store in Ridgeland, she also has stores in Birmingham, Ala., and Oxford. Amy Head products are also available in select cities across the state.

Recently, Head also launched a secondary brand called Poppy by Amy Head. The first products in the line are 16 shades of nail polish. While the main Amy Head line is more about classic products that, once a client learns to use correctly, she will use daily, Poppy is more on-trend. It’s geared toward college-aged and young women, who want products for a certain season or occasion.

Still, Head ensured that the polishes fit with into the principles of the rest of her company. “I’m proud of the formula. Its formaldehyde-free and cancer-free,” she says. “There are a couple other chemicals that typically show up in nail polish (that) have been found to have toxicity associated with them. We’re able to do it without that and have good coverage and staying power.”

Even with the new line, Head says she is taking expansion a slow step at a time. As she continues into her 50s, she says she can’t say where the company is headed next, but she just wants to continue bringing out the best in women.

“I was never interested in going to L.A. or New York or being a part of the fashion industry with it.” Head says. “It was more just how to make you and me and the woman next door feel amazing. I find that, gosh, women just need to feel good. They need to feel a certain level of attractive and its not comparable to the magazines, it’s not to be judged, it’s just what they need for their own selves. I just love being able to help that.”