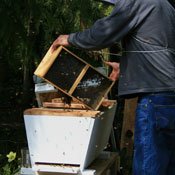 Here's a term that has gained popularity in the past couple of years: urban homesteading. It means making your property, or "homestead," as self-sufficient as possible, regarding food and supplies, while living in an urban setting.

You could also just call it sustainable living.

Either way, I'll write on this topic from time to time. Our first stop: keeping bees.

Bees require specialized equipment and are impossible to corral. You've heard of trying to herd cats? Bees are worse. They range a mile in every direction and get into anything that promises the sweetness of flower nectar — including, in one instance, invading a Brooklyn, N.Y., maraschino cherry factory and producing metallic-tasting red honey (!), The New York Times reports.

Because bees go so far afield, if a jar of honey is labeled "organic," be wary. Unless the bees are out in the middle of nowhere, it's impossible to certify their food sources.

On the other hand, if you keep a hive, you can take care of your end to ensure you are not adding artificial chemicals. Believe it or not, most commercial beekeepers use chemicals to control pests. They also pasteurize their honey—through either heat or irradiation, killing many of its natural nutrients—and even add thinners and artificial color. If you truly want to buy natural honey, look for products marked "raw."

If you have an acre of land or less in an urban setting, I don't advise trying to keep standard-frame hives. Neighbors might complain—and rightly so—about 200,000 or so honeybees living next door. To get around this, a number of urban beekeepers have joined together to provide rooftop hives. "Secret" rooftop-hive locations include The Whitney Museum in New York City, the Lloyd's Building in London and the Opera Garnier in Paris, The New York Times reports.

For city dwellers, particularly those living in apartments, rooftop hives may be worth looking into, but for most urban homesteaders interested in keeping bees, a few enterprising folk are making alternatives to standard, commercial hives.

One option is called an English Garden Hive, which is lightweight in comparison to standard frame hives and decorative. Some call this "the hive of the future" for backyard gardeners. Another choice is called the Kenyan, or top-bar hive, which is so adaptable that you can use boxes, 55-gallon drums, old crates or even a cast-off refrigerator for your hive. Either way, the idea is to harvest just enough honey for your own use, and let the bees keep the rest.

Most beekeepers keep stacked hives, adding hive boxes to the top, called "supers," for the bees to produce surplus honey for commercial purposes. But garden hives are small to begin with and usually don't have a number of supers. They're meant to house bees to pollinate your crops, thus improving produce yields, while also supplying a small amount of honey for personal use.

Urban beekeepers should also buy a bee variety that usually maintains a small population, is gentle to work with, and doesn't swarm a lot, such as Italian bees.

Urban Beekeeper Resources
• English Garden Hive and other essential beekeeping information and tools: brushymountainbeefarm.com
• Kenyan Top-Bar Hive—See videos at bees-on-the-net.com. This site also has a ton of other information and links about bees and beekeeping.
• It's getting a little late in the year for buying bees, but Keith Dale of Wee Three Bees Apiary in Hattiesburg, who keeps natural Italian bees, says he plans to have some bees on hand for sale into June. Visit his website, beelicioushoney.com, or call 601-447-6994.
• "Natural Beekeeping: Organic Approaches to Modern Apiculture" by Ross Conrad (Chelsea Green, 2007, $36) is a good book on chemical-free beekeeping.