A Heart for Survivors 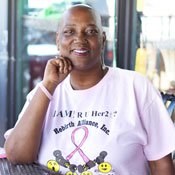 Stephanie Parker-Weaver's Rebirth Alliance hosts a day of fun for cancer survivors and their families June 2.

Stephanie Parker-Weaver has looked death right in the eye and said, "Out of my way!"

In 2007, she began to feel unwell, she said. She was inexplicably losing weight, was feeling nauseous and had developed what she called a shiny, itchy spot on her left breast. She brushed it off as sadness despite the protestations of her family and friends. Then, in December of that year, an old friend, Leroy Walker, who hadn't seen her in months, told her, "Stephanie, you're sick."

That finally scared her, she said, enough to schedule a physical and a mammogram. That test showed some abnormalities in her breast--like 12 grains of sand, Parker-Weaver's doctor told her. It turned out to be cancer, she said, but they had caught it early enough to give her an excellent prognosis for a full recovery. In January 2008, she underwent a lumpectomy.

She decided to go to a different doctor for follow-up treatment: Dr. Van Lackey at the Hederman Cancer Center of Baptist Health Systems. She expected a straightforward and short course of treatment, with little chemotherapy or radiation.

"Dr. Lackey began with, 'Stephanie, this is not good,'" she said, to which Parker-Weaver responded incredulously, "Are you sure you're looking at my chart?" The doctor who first examined her had led her to believe everything would be just fine, with a 99-percent to 100-percent cure rate.

Lackey rattled off a list of things that tilted the odds of recovery against her: She was young for breast cancer, 45 at the time, African American, had started her menstrual cycle before age 12. She was ER negative, he told her, a condition that makes her unable to take the most effective types of anti-cancer medications. She also had an unusual gene abnormality called Her2--human epidermal growth factor receptor 2. But the thing that disturbed the doctor even more was that, although the tumor was small, less than 0.8 millimeters or about the same diameter as a drinking straw, the cancer had spread to her lymphatic system. The cancer was one of the most aggressive she could have.

Lackey told her that with hard-hitting treatment--18 months of weekly chemotherapy plus another six to eight weeks of radiation--her odds were about 50 percent to 60 percent for recovery. Her first doctors had been right about her having cancer, but they didn't realize it was so bad.

Undaunted, Parker-Weaver began chemotherapy. In February of that year, she had a hair-cutting party. She didn't want to go through slowly losing her long curly locks to the drugs, she said. When her husband, Cordell Weaver, put a lock of her treasured tresses in her hand, the full brunt of what was happening hit her.

"I cried those hot tears of pain," she said, when she realized that she might not survive her cancer. Facing her mortal, and now-bald, image in the mirror, she was petrified.

"I finally got enough courage, and I peeked with one eye and saw what I looked like, and I said, 'Hmmm. Not so bad,'" she said. "And then I opened both eyes and smiled broadly."

It was, a friend's son told her, a rebirth.

Rebirth Alliance (rebirthalliance.org) is the nonprofit organization Parker-Weaver began soon after that. Its purpose, she said, is to educate the medical community, the pharmaceutical industry and the public about breast cancer, specifically the rare and aggressive type of cancer complicated by the Her2 gene. This type of cancer is most often seen in African American women and the Ashkenazi Jewish community.

Beyond its educational aspect, the organization also helps women and their families navigate what can be an intimidating and frightening experience. Volunteers go with patients to doctors' appointments to ensure they get answers to the tough questions about prognosis and treatment. Parker-Weaver says they also provide relief for caregivers.

On June 2, the Rebirth Alliance will celebrate National Cancer Survivors Day with a day of family-friendly activities at the Jackson Medical Mall from 10 a.m. until 2 p.m. The free event will include games, workshops for survivors and caregivers, an "in loving memory" tree, and a balloon release. This is a day of celebration for all survivors, which Parker-Weaver said includes those with active cancer as well as those in remission.

In June 2008, after eight rounds of chemotherapy, Parker-Weaver's heart began to fail. She was diagnosed with congestive heart failure due to the toxic chemo drugs for the cancer; fluid in the sac surrounding the heart had substantially decreased her heart's ability to pump effectively. Dr. James Warnock of the Jackson Heart Clinic gave her more bad news: The treatment she was getting to save her from cancer was destroying her heart. Treating the heart condition could save her life, but continuing the chemotherapy for her cancer was out of the question.

She stopped the chemotherapy. "I didn't have the option to take care of my cancer," she said. In January 2009, after the heart drugs proved ineffective, she had a pacemaker and defibrillator installed. Her breast cancer had disappeared.

Four years later, Parker-Weaver remains cancer free. She continues to sport a shaved head, however, in solidarity with her sisters and brothers wracked by the disease. She is convinced that God healed her for a purpose. "A cancer diagnosis does not mean a death sentence," she said.

For additional information about National Cancer Survivors Day, call 601-966-7252 or visit rebirthalliance.org. Volunteers are needed and sponsorships are available.