JPS to Keep Accreditation for Now 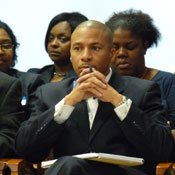 Cedrick Gray, who took over as JPS superintendent July 1, says he is an "advocate for children."

Jackson Public Schools officially hired a new superintendent May 21 and got some good news on its accreditation status.

Monday morning, Cedrick Gray signed a contract to become the next superintendent of JPS, effective July 1. Less than an hour later, Gray, school board members and other district officials were listening to lawyers for JPS and the state Department of Education debate whether JPS should lose its accreditation.

Early in the afternoon, the Commission on School Accreditation voted to allow the district to keep its current probationary accreditation status—for now, at least. JPS has until Nov. 1 to get into compliance with federal regulations regarding how it serves students with disabilities.

In an emailed statement after the decision, JPS interim Superintendent Jayne Sargent thanked the commission for its decision.

"We are absolutely thrilled with the commission's response to our request," the statement said. "We could not be happier. We will live up to their expectations in planning instruction for the children, involving parents in their children's education, and in providing monthly reports to the Commission and any other documentation that they request."

During the testimony, MDE lawyers presented evidence that JPS had failed to provide an appropriate education for students with disabilities. Tawny McCleon, a contractor who has been reviewing the district's compliance issues, said she believed JPS could show that it was complying with federal regulations within a relatively short time frame.

"It could be done within a year if everyone is on the same page," she said.

If the district does not resolve its noncompliance issues by Nov. 1, however, it will automatically lose its accreditation.

The accreditation issues stem from a 2010 complaint by the Mississippi Youth Justice Project, a project of the Southern Poverty Law Center, alleging that JPS had repeatedly suspended students with behavioral problems or sent them to the Capital City Alternative School rather than getting them help to overcome their problems. The complaint references issues dating as far back as 2002, although most fell within the 2007 to 2009 range.

MDE found that JPS was not in compliance with 10 federal regulations regarding students with disabilities and has since failed to resolve its noncompliance issues. During the hearing, Jim Keith, an attorney for JPS, suggested that the noncompliance issues were a matter of the district's paperwork not being up to the state's standards, rather than students being underserved on a large scale.

"Under (federal law), the bottom line that Congress intended is to provide an appropriate education for any child with disabilities," he said.

During a break in the hearing, Gray spoke with reporters about his new role as superintendent. Although he declined to comment on the hearing, Gray said he plans to "hit the ground running" to be ready to take over the job from interim Superintendent Jayne Sargent in July. "We know that no work like that starts on that day; work like that starts many days before then, so we're excited about getting started well before July 1."