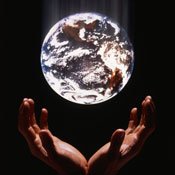 "Bread feeds the body, indeed, but flowers feed also the soul."
— The Koran

Don't you find it at all disturbing that the source of our food, the nourishment from the earth that sustains us in all ways, is not seen as sacred? And those who tend it, grow it and produce it are not seen as high and prominent among us? Shouldn't the path of the producer be one of great reverence and joy?

Today's farms and farming are not seen as sacred. Concentrated animal feeding operations harm the environment and treat animals as industrial "output" rather than living beings. Vegans often see them as profane, at least in perpetuating practices that are inhumane.

Thomas Berry notes this in "Evening Thoughts: Reflecting on Earth as Sacred Community" (Sierra Club Books, 2006, $19.95): "If in the excitement of a secular technology reverence for the Earth has diminished in the past, especially in the Western world, humans now experience a sudden shock at the devastation they have wrought on their own habitation. ... There is need for awareness that the mountains and rivers and all living things, the sky and its sun and moon and clouds all constitute a healing, sustaining sacred presence for humans which they need as much for their psychic integrity as for their physical nourishment. This presence, whether experienced as Allah, as Atman, as Sunyata, or as the Buddha-nature or as Bodhisattva; whether as Tao or as the One or as the Divine Feminine, is the atmosphere in which humans breathe deepest and without which they eventually suffocate."

We believe our inner space is sacred—the locus of beingness, the seat of the soul; Cherokees see the central place is where Creator resides: within. So, why not that space around us? When did Mother Earth become—not degraded—degradable? Not disrespected, but in any way worthy of disrespect?

The ancients who practiced alchemy said this is universal law: so within, so without; so above, so below.

And shouldn't we turn that around?

Is there an app for that? Dr. Masaru Emoto, author of "The Hidden Messages of Water" (Atria books, 2005, $16.95), now has an iPhone app called My Hado (water in Japanese) that helps people understand the true power of their thoughts and emotions with the proceeds supporting the nonprofit Emoto Peace Project. For more, see http://www.myhado.com.