Notes from the Buddha 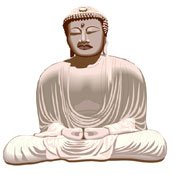 When I sat down to write about the Buddhist take on "doing good in the world," I began by searching for a few choice quotes from the Buddha himself. Being a contemporary sort of Dharma practitioner, I quickly pressed the power button on my MacBook. I felt mildly guilty and a little unsure as the computer quietly whirred to life. I have accumulated more than enough books to do research the old-fashioned way, but when my desktop blinked to life, remorse took a back seat to the way-cool glow of the screen and its promise of expedience.

As I jumped online and my homepage opened, I imagined a procession of tiny, novel-sized Buddhist masters emerging from the shadows of the bookcase across the room. Their robed arms gestured and waved at me like I was a waitress on the far side of a restaurant. One of them, a westerner, mimed taking a book from the shelf, dusting off the cover and thumbing through the pages. Like the cruelest of waitresses, I pretended not to notice and tapped out "quotes from the Buddha" on the keyboard. With that, most of my imaginary teachers let out a patient sigh; there were a few grumbles, and someone cleared his throat and spat loudly into a handkerchief. I bowed respectfully in my heart and proceeded, clicking the enter-return button with my right pinky.

Like a million-petal lotus spontaneously appearing from Internet space, the Google result of my inquiry registered a whopping 9,480,000 in 0.21 seconds. The words "vast," "infinite" and "unbounded" all came to mind as I read the surreal number with its bubble-trail of zeros. The masters on the bookshelf leaned over for a look. There were grunts and snorts as they conferred with raised eyebrows; one disappeared back into his hefty tome, trailing a sticky thread of cobweb behind him. I scanned the first of more pages than I could comprehend and clicked on the heading: Buddha Quotes at http://www.wisdomquotes.com.

I held my breath as a generic webpage assembled on the screen. Buried in the advertisements for insurance, psychic readings, and a listening device that synchronizes brainwaves and induces a deep, pleasurable meditative state, I found a short quip that reminded me of a brief note from a friend, something you would find on a curled, yellow post-it or the back of a business card:

"Happiness comes when your work and words are of benefit to yourself and others." —Buddha

I read the quote aloud, enjoying the sound of the words as they tumbled through the air, the soft alliteration of "when," "work" and "words." I glanced at the bookshelf, confident the retinue of teachers would approve of my choice, but they had started an argument. I have a large number of Tibetan monastics in the ranks, and they're always spoiling for a spirited debate; it's an important part of their education and training. Arms were flying. There were shouts and claps as they disputed the authenticity of my find.

I poked around online, trying to call up the origin of the quote, but it was hopeless. I saw the short, pithy sentence repeated verbatim on numerous sites, always attributed to "—Buddha." In the meantime, the debate on the bookshelf was really heating up. A translator, who was speaking Tibetan, English and French in turn, shouted, "Alors!" The Dalai Lama giggled. I thought about moving to another room so I could concentrate.

Just as I was about to pack up and leave, I came across a verse from the Dhammapada, a well-documented collection of teachings attributed to the historical Buddha, whose name was Siddhartha Gautama. His teachings, originally written in an ancient Pali dialect, have given way to numerous translations, but this version seemed like a healthy mix of formality and accessibility.

Verse 2.
Mind precedes all mental states.
Mind is their chief; they are all mind-wrought.
If with a pure mind a person speaks or acts
happiness follows him like his never-departing shadow.

When I read this quote aloud, my bookshelf teachers, scholars and gurus seemed to calm down, the heat of their dispute dissolved as quickly as it had appeared. Zen master Thich Nhat Hanh, who hadn't weighed in until the debate concluded, nodded his quiet approval. They did some scurrying around, folding hands and bowing, and I heard lots of laughter from the deferential and devoted crew. In spite of their differences, they each represent the historical Buddha and carry the torch of his teachings, which contain 84,000 teachings alone for 84,000 different human emotions.

The Buddhist tradition includes a practical code of conduct called the Five Precepts. (Originally, there were 10; they've been updated.) Precepts are a type of promise or vow that help humans recognize and act with the "pure mind" that leads to happiness. Simply stated, the precepts are: no killing, no stealing, no sexual misconduct, no lying—about both spiritual attainments and the ordinary stuff—and no intoxicants. These are all rules we want our children to live by. Most of us are aware that these basic precepts are difficult to maintain.

Fortunately, we are not alone in our endeavor to be good people. Contemporary spiritual masters from religious traditions across the planet—Christian, Hindu, Islam, Judaism, Baha'i and Rastafari—are living, breathing examples of how to be in the world. In my experience, teachers are extremely helpful and widely recommended. Meeting a real-time teacher is a major upgrade from online Buddha notes—seriously, like the difference between an Etch-a-Sketch and an Xbox 360.

As I finished my task, I realized the room where I write and meditate had become quiet. The bookshelf was back to normal. The colorful art and sweeping calligraphy that tattoos the spines of my books danced in the dim light. With kids, family and work, it's been a while since I sat down with a book and pored over its invaluable pages, but that's OK.

I saved my writing and closed the computer, let the re­search and imaginings fall away as I quieted my mind and practiced, to the best of my limited ability, the example of my teachers and "—Buddha."

'Drop by Drop is the Water Jug Filled'
How Mindfulness Changes the World, One Person At a Time

• Mindfulness reduces anger and aggression.
"Through mindfulness practice, I've learned to become more aware of how anger and other negative emotions arise, exist and dissipate. This awareness slows the process down. Because of this, I'm no longer overwhelmed by anger and rage. When the process slows down, I can see it developing, which allows me to have choice in how I respond (or not) to these feelings."
Convict Tommy M. , Prison Dharma Network (http://www.prisondharmanetwork.org)

• Mindfulness has people feel and look happier.
In "The Happy Face of Mindfulness," researchers began with the premise that mindfulness makes people happier, then set out to discover whether their faces reflected that basic assumption. Two different studies—one with novice meditators and one with experienced meditators, showed that both groups actually looked happier than the controls in the studies. (Published in the Journal of Positive Psychology, Volume 7, Issue I, January 2012 by Yowon Choi, Johan C Karremans and Henk Barendregt)

• Mindfulness helps us deal with pain
"The positive effects of mindfulness meditation on pain and working memory may result from an improved ability to regulate a crucial brain wave called the alpha rhythm," Science Daily reported in April 2011. "This rhythm is thought to 'turn down the volume' on distracting information, which suggests that a key value of meditation may be helping the brain deal with an often over-stimulating world." (See http://www.sciencedaily.com)

• Mindfulness makes us more aware of others' needs.
A University of Rochester Medical Center study found that "training doctors in mindfulness meditation helped them to listen better and not be as judgmental both at home and at work," reported the Huffington Post on May 1. The study is scheduled for the June issue of the Journal of Academic Medicine.