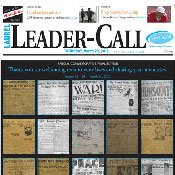 Community Newspaper Holdings Inc. published its last issue of the Laurel Leader-Call on March 29. Another company has since bought the paper's name.

Jones County is a study in duality. It has two courthouses in two county seats: Ellisville and Laurel. During the Civil War, the county supposedly seceded from the state of Mississippi and the Confederacy, a contested historical legend. Howard Industries boosted economic development in the county but, in 2008, federal Immigration and Customs Enforcement agents arrested almost 600 undocumented immigrants who worked there. It was the largest ICE raid ever.

The newspaper business in Jones County has its own duality. For 100 years, the Laurel Leader-Call was the daily newspaper, but it wasn't always the only game in town. Alabama-based Community Newspaper Holdings Inc. bought the newspaper in 1999 to add to its inventory. Advertising revenues have declined in recent years at the Leader-Call. Last fall, when the paper marked its 100th year of publication, the Laurel Leader-Call went from a daily to a four-times-a-week publication.

In 2007, a rival weekly publication, The ReView of Jones County, started up with a vengeance. Its staff consisted of former CNHI employees, said Mark Thornton, ReView editor and publisher. The ReView regularly criticized the Leader-Call for factual errors, missed typos and ignored coverage. The independently owned weekly siphoned advertisers away from the corporate-owned paper and even got the bread-and-butter of many small newspapers: the legal notices.

"We wanted to go to the community that was underserved and disgruntled. We decided to do a community newspaper," Thornton said. "Corporate news is not a good business model for community newspapers. We've said all along: It's corporate media that's destroying the industry."

CNHI published the last issue of the Laurel Leader-Call on March 29, 2012. It was a triumph for the ReView, but a heartbreaking end for the Leader-Call staff. Luckily for them, Wyatt Emmerich rode in on a white horse.

Emmerich, head of Mississippi-based Emmerich Newspapers Inc., learned Monday, March 26, that the Laurel Leader-Call was closing. He went to Laurel that Wednesday to meet with the staff the day before they put their last issue to bed. He told them he was starting a new newspaper in Jones County, the Chronicle, and wanted to hire all of them. He said 19 out of 20 employees took his offer. (CNHI reported the Leader-Call had 18 employees at the time it closed.)

He said prior to the demise of the Laurel Leader-Call, the ReView sued CNHI for interference and monopolistic practices. "It was a kitchen-sink lawsuit," Emmerich said. He thinks that might have been a factor in killing the newspaper.

"It's pretty much unheard of in a market that size. Jones County is big enough to have more than one paper," Emmerich said. He estimates Jones County is a $1-billion retail-sales market, and it's a market he really wanted. He had looked into buying the Laurel Leader-Call before it closed. When CNHI shut it down, he even called corporate top officials (now in Montgomery, Ala.) and offered to buy the paper's computers, desks or the building. They told him they wouldn't for legal reasons, Emmerich said, but wouldn't tell him much more.

It turns out something else was in the works. Two weeks after CNHI shuttered the Laurel Leader-Call, the ReView of Jones County announced they had acquired the name. Emmerich suspects it was part of the kitchen-sink suit.

Jim Cegielski, who owned the ReView, doesn't disagree, but said he can't discuss any details of the lawsuit because of a confidentiality agreement. He isn't sad that CNHI killed the Laurel Leader-Call, and he's thrilled he now owns the name.

"We wound up driving them out of business," Cegielski said. In the meantime, he was already in negotiations to buy the name Laurel Leader-Call. He was as surprised as Emmerich, though, when CNHI decided to close the paper.

So the ReView of Jones County is no more--it has taken the name Laurel Leader-Call. It's also gone from a weekly publication to a three-times a week publication. Cegielski got the Leader-Call subscriptions as well as the name.

"There are very few locally owned papers. Wyatt's always coveted this market. He's underestimated us from the beginning," Cegielski said.

"I believe they were struggling against us for many, many years. They saw their numbers drop," he continued. "We basically control the local advertising here. I think we put out a better paper than they do. It's such a triumph of a little guy  who persevered."

Emmerich's new newspaper, the Chronicle, is selling 1,000 copies in racks and already has 2,200 subscribers. It also comes out three days a week: Tuesday, Thursday and Saturday--the same three as the reborn Laurel Leader-Call.

"Readers are happy to have more choices and competition," Emmerich said.

In an email following a phone interview for this story, Cegielski wrote the Jackson Free Press to say that he has the "utmost respect for Wyatt Emmerich and his newspaper empire" although Emmerich had commented on SuperTalk radio that Jones County had no significant newspaper. Cegielski took this as an insult.

"It made it very clear that he was trying to diminish the amazing accomplishments of The ReView of Jones County, a paper that Mr. Emmerich personally watched win 112 Mississippi Press Awards in just four years, including the top prize for General Excellence--twice," he said.