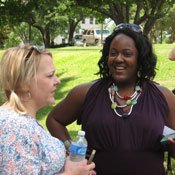 Mississippi's Unite Women march last Saturday felt more like a community picnic than a politically charged demonstration, as participants spread blankets under shade trees in front of the state Capitol's south steps and interspersed motivational speeches with musical interludes. No matter how much fun they must have had coming up with the slogans on their signs, however, the protesters were serious about their message.

People around the nation are watching Mississippi to see how its politicians and voting public treat reproductive issues, they said.

"We here in Mississippi don't realize sometimes the role that we play," former Greenville Mayor Heather McTeer said. "... The war on women is real, and it's real for us here more than anywhere else."

About 60 people gathered for Saturday's protest, which was part of a nationwide effort organized by a group called Unite Women, with events in almost every state.

In Jackson, people came from as far away as the Gulf Coast to participate.

Saturday's march raised many of the same issues as a protest last month. Protesters opposed state legislators' attempts to pass anti-abortion bills and other legislation that would limit reproductive rights.

In a February press release announcing Unite Women's formation, the group cited attempts to pass personhood legislation in several states and efforts by Virginia legislators to require intrusive transvaginal ultrasounds before abortions as evidence that a "war on women" exists.

"In Mississippi, lawmakers took a cue from Virginia and are now pushing the same type of regressive, restrictive legislation," the release said, likely referring to an anti-abortion "fetal heartbeat bill" that some said could require transvaginal ultrasounds or outlaw most surgical abortions altogether.

McTeer encouraged the women at the march to run for elected office, saying there are too few women at the table when politicians discuss reproductive issues.

"There's more than just politics at stake here. This is life and death. This is an economic issue," McTeer said. "Last time I checked, there weren't going to be any jobs created because someone was in my vagina."