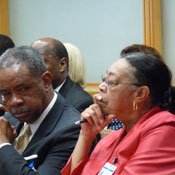 JPS Board Member Otha Burton, left, and Interim Superintendent Jayne Sargent listen to a hearing about whether or not the state should revoke the district's accreditation.

Jackson Public Schools will have to wait a bit longer to find out whether it will lose or retain its accreditation status.

After listening to several hours of testimony at an April 26 hearing, the state Commission on School Accreditation decided to call it a day. The commission and legal teams for the Mississippi Department of Education and JPS agreed to adjourn the hearing until May 21.

The commission is considering whether JPS should lose its accreditation due to how it has disciplined and served students with disabilities. In September 2010, a complaint by the Mississippi Youth Justice Project, a project of the Southern Poverty Law Center, alleged that JPS had repeatedly suspended students with behavioral problems or sent them to the Capital City Alternative School rather than getting them help to overcome their problems.

MDE investigated and, in November of that year, found that JPS was not in compliance with 10 regulations regarding students with disabilities. Since the district did not resolve its areas of noncompliance, it might lose its accreditation.

At the hearing, Ann Moore, associate state superintendent for the Office of Special Education, explained that JPS is not in compliance with federal standards for how it should treat students with disabilities under the Individuals with Disabilities Education Act.

"The heart of IDEA is to ensure that all children with disabilities receive a free and appropriate public education," Moore said.

Federal law requires school districts to provide extra help, or "related services," for students with disabilities, even if they are not in special-education classes.

For example, students with problems speaking should receive speech therapy, and students with emotional difficulties should receive counseling, said Ken Swindol, a consultant for MDE. Many districts do not have the staff or training to provide the services students need, however.

"The capacity is generally not there in the district to provide related services," he said.

Several witnesses said that the district has been working hard to train its staff in how to comply with IDEA regulations, but those changes have mostly happened at the top administration levels and have not made it down to the student level, yet.

Until JPS puts its training into practice in individual schools and classrooms, she said, the district will not be able to address the needs of all the students, and will therefore remain in noncompliance with IDEA.

Several members of the commission questioned how JPS' noncompliance could affect the state. If the district does not resolve its issues by February of next year, Moore said MDE would have to include that in a report to the U.S. Department  of Education, which could impose sanctions on the state.

Losing accreditation would mean, in part, that JPS students could not participate in sports, band, choir or other after-school activities.

JPS did not get to make its case for keeping its accreditation at this meeting, but will get a chance to do so on May 21. A report from a follow-up visit by MDE earlier in April will also likely be available for the commission to consider at the May meeting.

real talk, JPS should send an invoice to Lonnie Walker for his hard-fought severance to be returned to Treasury. like yesterday.