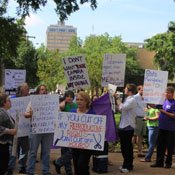 Demonstrators gather at the Capitol this morning to protest anti-abortion and personhood efforts in the Legislature.

About 50 people gathered this morning to march around the Capitol and oppose state legislators' attempts to pass anti-abortion bills and personhood legislation during the current session.

Demonstrators marched from Smith Park and around the Capitol, carrying signs with messages such as "No means no," "It's 2012, not 1812" and "Men of quality stand for women's equality."

Jennifer James drove three hours from Hernando with her 13-year-old daughter, Kayla, to be at the march. Jennifer said she doesn't want her daughter to have fewer rights than she had.

"I want her to have access to IVF or birth control and, God forbid, abortion, if she finds she needs it," she said.

Atlee Breland, founder of Parents Against Personhood, said her organization does not officially oppose any of the anti-abortion bills in the Legislature right now since all the personhood resolutions are dead, but they are concerned about language in HB 1196, the "fetal heartbeat bill," that says an "unborn human individual" exists beginning at fertilization.

Breland is also opposing personhood legislation and initiatives in other states.

"We think that personhood laws are a huge part of the war on not just women, but the war on families," she said. "Personhood laws are fundamentally anti-family, because they threaten families' access to medical care that helps them become families, and to birth control that helps them plan families at the responsible time, and to medical care for women suffering from complications of building a family."

Lori Gregory Garrott, one of the organizers of the march, said they chose this date because the Legislature is still in session. Another march is planned for April 28, when a national organization called Unite Women is organizing events around the country to denounce what they call the "war on women."

"It'll be in tandem with every other capital, and a march on Washington," Garrott said. "We're actually kind of doing this one as an awareness (campaign) and we're handing out 'save-the-date' stuff for that one. We think it'll be more well-attended because it's on a Saturday."

See video from the march at the Capitol below.

It's interesting that Jennifer James "doesn't want her daughter to have fewer rights than she had". Apparently, she has no problem with her granddaughter having no rights at all, since she wants her daughter to have access to abortion. It's also interesting, and more than a little ironic, that Atlee Breland states that personhood laws are anti-family. It seems to me that protecting the right of children to live would be considered pro-family, while killing children would hinder families.

An embryo is not a child. You guys can claim that it is over and over and over again, just as I can say that the sky is red. But saying it doesn't make it so. Ultimately, all you've done here is beg the question.

@notmuch, personhood laws aren't just about abortion. If you read our statement, you'll know that we are neutral on elective abortion, but we oppose personhood laws because of their unintended consequences for birth control, infertility treatment, and pregnancy care. My own family wouldn't exist without infertility treatment. We fought harder than most people will ever know to have our family, and I want every infertile couple to have the same access to medical care that we did. When you want to take the option of IVF away from the 1 in 8 men and women who suffer from infertility, that's anti-family. Before we found out we were infertile, we waited almost two years after our wedding to start a family. We wanted to have access to health insurance with maternity coverage, and to be financially secure enough that one parent could choose to stay home. We later used birth control to space our children apart and to decide that three kids was enough for us. Taking away reliable and effective birth control options -- and medical treatment options for conditions like endometriosis -- is anti-family. Please, feel free tell me exactly what's ironic about wanting to plan my family responsibly, and about wanting to bring children into the world even though we needed medical assistance to do it.

@notmuch Hypothetical: If your NINE (9) YEAR OLD DAUGHTER were raped and became pregnant by a man who was not of her race, had escaped from Parchman and was HIV positive, would you insist that your child carry this pregnancy? Add this to the question: You knew that night that this tragic event had occured and you were also informed by her pediatritian that the morning after pill was available. If your answer is "YES", present this question to nine of your friends.

Notmuch-No matter the reason a women needs or accesses their LEGAL option to have an abortion. It is part of reproductive health care in the US. Women and families do not need government in the private decisions regarding their reproduction whether its the birth control pill, the morning after pill, IVF, or abortion. That is the bottom line.

@notmuch: I do not have to justify what I said yesterday to you or anyone else, but I will speak my mind in response to your callous remarks. I never said that I wanted my child to choose abortion. I said that I wanted her to have access if she found that she needed it. Personally, I believe abortion should remain legal, but that is not the only reason I oppose these bills AT ALL. Reproduction is a complicated issue. There are many reasons a woman would seek to use the morning after pill or have an abortion, and they are not all scenarios with which even all opponents of them would completely disagree. What if she were raped? What if there were medical complications to her or the embryo? Those decisions will be up to her. I respect her enough to understand that one day she will be grown, and face realities in life that men do not face. She is a wonderful child with a special love for younger children, and will make a terrific mother someday. I have faith in her character enough to believe that she will make good decisions, on which I will back her 100%. I also have a son, whose future I look after, as well. I do not want him to inherit a country in which he must face the prospect of fathering more children than he feels capable of loving, caring, and providing for because there is no access to reliable birth control. If either of my children were to encounter a fertility issue, I would want them to have access to IVF to build their families, if they so chose. I would also encourage them to look into adoption. These laws we are protesting threaten all of that, not just abortion. As a mother, it is not only my right and desire to fight for the rights of my children and their futures, it is my duty, and I take it all very, very seriously. After all, I chose them!