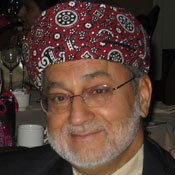 Religious activist Imam Ali Siddiqui is the keynote speaker at the 6th Annual SCLC-MIRA Unity Conference March 30 and 31 at the Mississippi Arts Center.

Imam Ali Siddiqui is intimately familiar with the destructive nature of religious fundamentalism and the problems of immigration in the modern world. Born in 1944, his family fled their native India in 1950, in the wake of that country's liberation from the British Empire and India's partition into Hindu and Muslim countries. That division created majority-Muslim Pakistan, and the Siddiqui's family settled there.

The imam has a long history of activism. In 1969, he was forced to flee Pakistan, when speaking out against the military regime created a dangerous environment for his family. "Things became quite rough because of my activities," he said.

Siddiqui is the keynote speaker at the 6th Annual SCLC-MIRA Unity Conference dinner March 30. He spoke with the Jackson Free Press via telephone from California.

What does unity mean to you?
Unity means working together and creating a working relationship where we can work with our differences, whether it is a religious difference or an ethnic difference, maybe sometimes just a difference in personalities. But we can still set all of that aside and work for a cause, for a common interest.

Talk a little bit about the role of religious activism.
It doesn't mean to me evangelism. I am not going to evangelize anybody. I have a calling because I am a Muslim, and God's commandment is to stand up for justice, to speak for those who are voiceless, to provide assistance to those who are weak, and also working for human rights and civil rights. This is what it means to me.

Where I'm coming from: I'm coming from a call from God. God tells me because of my faith that I cannot just sit home. I have to go out and help those who are in need. ... You have to come out in public. Raise your voices for victims, for those who are exploited, those who have not been given their rights or mistreated, even strangers.

What about religious freedom? Does that have special meaning?
It's the freedom for anybody and everybody to choose what they believe in, as long as that choice doesn't step on someone else's rights. And that goes for those who are agnostics or total non-believers—they don't believe in God or any faith. The have the right to choose what they like.

In the Islamic concept of faith, religion is only one part of Islam. We call it a way of life, just like Hinduism and also Buddhism is a way of life. ... It has the religious aspect of it, it has the social aspect of it, it has governance, and it has family and everything else. So now, this is a right to everybody else. ... I shall protect your right. ... I am a Muslim, everybody knows; I do not hide anything ... I stand up; I stand with those who are oppressed, I give them a voice. I sit with them. In case of economic rights, I visit their employers ... and sit there and provide moral support, if nothing else.

MIRA's materials mention the "liberation philosophy" of Islam. Can you define that?
Liberation has a religious connotation, and also, in the words of Malcolm X, he says, "Lincoln may have freed your body, but Islam frees your mind." That (means) free thinking, that you're open to understand things and open to make your own decisions. That's freedom. And that freedom comes from the Islamic concept that God almighty has created us, made us responsible, but has given us free choice—that we make the decision about what is right and wrong, based, of course, on the teachings that are there.

It's all about choice, and we are held responsible for the choices we make. That concept is very liberating. At the same time, the holy Quran says, "What is wrong with you that you do not support those who are oppressed?" That is a call from God almighty that we have to be standing with who are oppressed and free them. Or provide the opportunity so that they can free themselves. ...

Everyone should have the right to earn a living. Actually, minimum wage doesn't cut it. It has to be a living wage where they can sustain their life. Then, they'll be free when they are not oppressed, they're not exploited, and they can have time with their family. They make enough money so they can take care of their family, and then they can think freely about what is right and what is wrong. They're not always, pardon me saying it, under the gun, of employer, plantation owner or what have you.

What is the path to understanding as you see it?
Let me first tell you that self-righteousness is self-destructive. Having said that, yes, there are a lot of opportunities for starting a dialogue with people who are termed as fundamentalists, evangelical, conservative, not only among the Christians, but among the Jews, among Muslims—across the board. The approach I have taken—and I've been working with interfaith dialog for a long time ... (is) dialogue, not debate. This is how I function in America: ... There is a common ground, and we can work together ... (with) clear understanding. When you have understanding, you have respect. ... In the words of Dr. (Martin Luther) King, to create understanding doesn't happen through words, it happens with action.

"Stand With Us: Uniting the Interracial Interfaith Communities of Color," the Southern Christian Leadership Conference and Mississippi Immigrant Rights Alliance 6th Annual Unity Conference and Awards Dinner, is March 30 and 31 at the Mississippi Arts Center (201 E. Pascagoula St.). Cost for the conference is $25; dinner is $30; attend both for $50. For information, visit http://www.yourmira.org.