Farewell to a Newspaperwoman 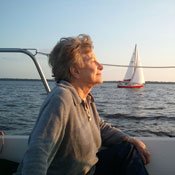 Celia Emmerich was a writer, champion of the arts, volunteer and mountain climber.

When I entered the classroom at Millsaps College, where I teach a continuing education course for writers, there was a bright-eyed student seated at the table, notebook opened and ready. She looked to be about 80.

We talked as the other students filed in. She seemed vaguely familiar, and I sensed that I probably knew her from some distant time and place.

As we talked, I discovered that she was Celia Emmerich, widowed wife of journalist John Emmerich, for whom I worked in the 1970s at the Greenwood Commonwealth.

We reminisced about the old days in Greenwood and shared fond memories of the newspaper, where our columns sometimes ran back-to-back.

We laughed about the Super Scooper Award, which John gave to reporters who excelled in news gathering. Celia rolled her eyes when I mentioned it, understanding full well that reporters did all they could not to win the award, even to the point of hyping the work of competitors so that they would win the award. No one wanted to be Super Scooper because it seemed pretentious and scatological at the same time—just the sort of thing that could dog you and end up in your own obit.

After the class began, I asked each person what kind of book they wanted to write.

"I want to write my memoir," Celia said. Then she laughed. "But I'm not sure what to do with it after I write it." She wondered if I thought anyone would be interested.

At that point, I should explain that Celia Emmerich is an important woman in Mississippi newspaper history, standing alongside Betty Carter of the Greenville Delta Democrat-Times and Hazel Brannon Smith of the Durant News. That in itself would be enough to interest a publisher in her life experiences. But there was much more to it than that.

Celia and John Emmerich were partners in the newspaper business. She was the unrepentant liberal who never wavered in her convictions; he was the nervous moderate who was always second-guessing himself. Together, they worked for civil rights and community development and helped make Mississippi a better place to live. In her spare time, Celia championed the arts and volunteered at the Leflore County Health Center.

Needless to say, I was proud to have her in my class. She had something to say about just about everything I brought up in class. She had lots of questions.

She earned her opinions the hard way—through experience.

Curious about the Himalayan Mountains, the former Ole Miss cheerleader traveled there by herself in the late 1980s. In the 1990s, while in her sixties, she bravely sailed the Maldives Islands. She was always going to France for one thing or another.

When the class concluded, I noticed she stayed seated while I gathered my papers. Once everyone was gone, except for a promising children's book author named Tony, she fished her walker from its hiding place, snapped it into place and proceeded to the door.

Tony and I walked her to the elevator and asked how in the world she ever made it to the third floor with that contraption.

She smiled but didn't answer.

"Can you make it down the front steps?" I asked, concerned.

Tony took her walker, and I offered her my arm for support and ever so slowly walked her down a very steep stairway of steps.

Once at the bottom, with her at the wheel of the walker again, we scooted across campus to the parking area, where her son, Wyatt Emmerich, was supposed to pick her up. Unfortunately, he wasn't there yet.

"No need to do that," she said, nodding in the direction of two strapping male students who quickly volunteered, "We'll be here a while."

I left her in good hands, looking forward to seeing her again in class. I wanted to hear more about her memoir. But that was her first and last day in my class.

I don't know exactly what happened, but she ended up in the hospital. After she was released, she collapsed at her home, felled by a heart attack, the same illness that killed her husband.

Some great stories never become books, leaving us with little more than our imagination to sort out the details. I can only guess at the fearless spirit that would have inhabited her book. Celia was quite the lady journalist.

James L. Dickerson is co-author of "Sons Without Fathers: What Every Mother Needs to Know" and author of "Love on the Rocks: Romance to the Rescue."