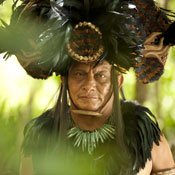 Dr. George Bey does not subscribe to the belief based on the Mayan calendar that the world will end Dec. 21, 2012. However, he has a request of believers: "Please give me your money a few days before," he says. "I would like to use it toward research."

In his office at Millsaps College, among his maps and books and in the company of a life-size skeleton hovering by his desk, Bey leans back in his chair and speaks excitedly about his research on the ancient Maya civilization in Mexico. He works part of the year with his archeology students in the Yucatan at Kiuic, a 4,000-acre biocultural reserve near the Mayan town of Oxkutzkab about two hours south of Merida, Mexico. Millsaps owns the reserve, and the college's non-profit organization, Kaxil Kiuic, manages it.

Experts know the Maya people for their pre-Columbian written language, and for their art, architecture, and mathematical and astronomical systems. The culture, which dates back to around 1800 B.C., reached its peak in the first century. For reasons yet to be explained, the civilization went into decline beginning around A.D. 800, and the people abandoned many cities. Today, descendants of the Maya are spread throughout Central America.

Bey is the narrator of a new National Geographic documentary, "Quest for the Lost Maya," premiering March 28 on PBS. The film highlights research and discoveries at the Kiuic site, one inexplicably abandoned Maya site. Bey interviews experts—from locals to students to researchers—to "paint a picture of the past," he says.

Not all Mayans were alike. Bey says research on the northern-most groups has been neglected, in part because written language was less important to them. "Quest" explores the possible social, economic and political motivations of the Maya. The mass abandonment is intriguing in light of fresh evidence that some people intended to return. They overturned some objects, for example, protecting them from the elements.

Patti Wade, Millsaps' director of communications and marketing, says getting a spotlight on stories at the college is important, to the school and to students. In this particular case, Bey's research at Kiuic was of national interest.

The journey to the documentary began August 2010, when science writer Dan Vergano published "So Long, Said the Maya" in USA Today. Vergano had traveled to the Yucatan and spent a week with Bey and his students at Kiuic. Eventually, the article wound up in a brainstorming session at National Geographic. After a few weeks of discussion with Bey, producers decided to pursue the project. The deal was completed after National Geographic received funding from Japan's Tokyo Broadcasting System and France's Canal 5. "Quest for the Lost Maya" was shot on location and includes interviews, live action recreations, illustrations and animation.

Although the documentary focuses on the archeological research, researchers are engaged in other types work at Kiuic. "We do biology, geology and sustainable living," Bey says. "We've built an off-the-gird research and learning center, solar-powered. We think it's a first-of-its-kind, a model for biocultural types of research and has the potential to serve the college for a century."

About 12 years ago, local Mayans told Millsaps researchers about some land that was up for sale. "The patriarch of this family had died," Bey says. "And all the parcels were going to be divided."

The Millsaps group was looking for an archeological research site, and Mexican government officials were looking for somewhere to preserve the local biology.

Working with the Mexican government, which provided some funding, Millsaps acquired the land to create a structure for research and learning that would include a variety of disciplines. It became a "living laboratory," Bey says.

New archeological technology has become invaluable at Kiuic, he says. Researchers use computers, remote sensing equipment, satellites and radar to map out the landscape and buildings on the site, which is much more efficient than older methods.

"What you can do (now) in one year would have taken you five," he says.

But while technology may speed up certain aspects of the team's work, archaeologists cannot do all their research remotely.

"You have to have an interest in being on the ground," Bey says. "You have to walk around, talk to local people, check maps and photographs. You have to survey, and you have to do detailed excavations."

In the process, Bey believes his team of Millsaps researchers are uncovering important truths about the ancient Mayan civilization. "The question of 'why did they leave?' Is perhaps not as important as 'why didn't they come back?'" he says.

Oh, and about that calendar: Mayan calendars are cyclical. It's resetting, Bey says, not ending.

"Quest for the Lost Maya," airs March 28 at 9 p.m. on PBS. Check with your local provider for channel information, or visit pbs.org to learn more about the documentary.

CORRECTED March 23 to change the time to 9 p.m.