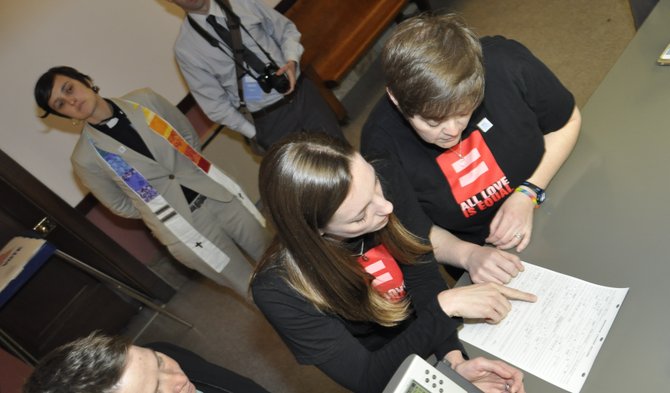 Jessica and Amber Kirkendoll look over their application for marriage in the state of Mississippi. Photo by Trip Burns.

This morning five same-sex couples filed for marriage licenses at the Hinds County Courthouse in Jackson. About 30 supporters arrived with the couples holding signs that read "We Do," and formed a circle of prayer before entering the courthouse and going through security.

Jasmine Beach-Ferrara leads a prayer in a circle of supporters.

Jasmine Beach-Ferrara, executive director of the Campaign for Southern Equality, led a prayer in the middle of the circle of supporters, asking for the couples' marriage licenses be granted by the state of Mississippi.

Couples listen to a prayer before entering the Hinds Co. courthouse.

Outside of the clerk's office, minutes later, the couples lined up two-by-two to apply for marriage licenses. 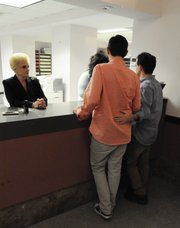 Jeff White and John Perkins apply for a marriage license in the Hinds Co. courthouse.

Each couple was told that, unfortunately, there were no spots on the application for two females or two males. The clerk then asked which person would like to appear first on the license.

The couples each paid fees to the clerk's office and their information was then entered into the system. Each couple physically signed the receipts and left with an official copy by the state of Mississippi.

"We hope to return soon," one person said. "Our love is not going to change."

WATCH: Video from this morning at the TV-JFP page >>