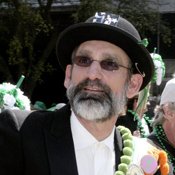 The Mal's St. Paddy's Parade, held March 17 this year, is widely considered one of the most successful and popular public events in Mississippi. The event regularly attracts more than 60,000 locals and tourists to participate in the festivities and brings upwards of $7 million into the local economy. The parade's website describes the celebration as "a green Mardi Gras ... a lighthearted homecoming where everyone is king and queen for a day."

The host of the event is Hal & Mal's (200 S. Commerce St.), owned by brothers Hal and Malcolm White. Proceeds from the parade—through float registrations and other event entry fees—benefit the Blair E. Batson Hospital for Children. The parade is free. The proceeds come from the Pet Parade, which has a $5 entree fee, and the after-parade street dance in the Hal and Mal's parking lot, which has a $5 admission fee.

The parade was first held in downtown Jackson in 1983 when Malcolm White, missing the fun he'd had celebrating Mardi Gras while living in New Orleans in the '70s, decided to hold his own springtime celebration. White obtained a permit from the city, rounded up a few local bands and a pickup truck and gathered a group of friends dressed up as characters from various Tennessee Williams plays, then led the procession down Capitol Street.

That first parade attracted a few hundred curious onlookers, and the event only grew from there. Over the years, the parade has featured involvement from the Bluz Boys Band, the O'Tux Society, the Rude Men, the Krewe of Kazoo, the Sweet Potato Queens, and other local parading and social clubs.

The theme of this year's parade is "That's What I Like About the South." The original parade route started at CS's, passed down Capitol Street and ended at Ole Tavern at George Street. (This year's Friday night second line will start at CS's and end at Hal & Mal's.) The main parade Saturday starts at 1 p.m. at the corner of State and Court streets in downtown Jackson, and makes its way up West Capitol Street, past the Old Capital Museum, then on to South Lamar Street, where it makes its way back to Court Street.

The main parade starts at 1 p.m. After the parade, Hal & Mal's hosts a street dance in its parking lot on South Commerce Street featuring live music from the Bluz Boys Band and Ole Skool Review. Admission is $5.