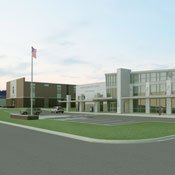 Plans for a new school on West Capitol Street call for large windows to let in natural light.

JH&H Architects, the firm that is designing the school, is planning a two-story building with 18 classrooms, a representative from the firm said at a January school board meeting.

The new school will be built in the same area where Barr and Poindexter are now located, next to the Boys and Girls Club, and will serve about 400 students.

The school will be named for Jessie Bryant Mosley, who helped save the historic Smith Robertson School from being torn down, and Edwin Mullen, a former teacher and Jackson Public Schools principal. The JPS board approved naming the new school in honor of Mosley and Mullen at a February meeting.

In addition to serving as the first director of the Smith Robertson Museum, Mosley established a child-care center near Poindexter and Barr elementary schools. She also organized the National Council of Negro Women Inc. for Mississippi. She died in 2003 at age 99.

Mullen was born in Grenada and served in the Army during World War II and the Korean War. He earned his bachelor's degree from Jackson State University and his master's degree from the University of Michigan. He and his wife, Daisy, were both teachers. After retirement, he worked part time as coordinator of the parent center at Van Winkle Elementary School. He died last year at the age of 86.

After his death, JPS issued a resolution mourning Mullen's passing.

"Mullen was a valued and treasured part of the Jackson Public School District Family, and his dedication, commitment and passion to teaching our children will undoubtedly leave a void," the resolution states.

At the board's January meeting, board member Timothy Collins said it could help the area to have a brand new school built in the neighborhood. Otha Burton, who is also on the school board, said he thought that the project was one of the most exciting developments going on in west Jackson right now.

After the design for the school is finalized, the board will put out a request for bids for the construction of the project.