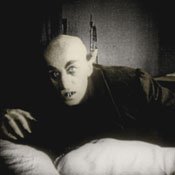 Each generation likes to think of itself as completely new and different from those that went before, but a glance at popular media raises the question: Are our monsters predictors of change?

Back in the 1950s, American popular culture saw a wave of mummies, vampires and zombies, partly as a reaction to the nuclear bomb and fear that radiation would irreversibly alter the genetic make-up of the Earth's beings. From that delving into our ghosts, goblins and Godzillas of the mind, a quest for higher consciousness arose, with a turn toward the Age of Aquarius: Mothra turned to Flower Power. This popular wave from the 1960s birthed a back-to-the-land movement, the "Whole Earth Catalog" and Earth Day of the 1970s.

Soon enough, the pendulum swung again, and the "Stoned Soul Picnic" of the '70s turned toward a monster of a different type. Gordon Gekko in the movie "Wall Street" epitomized the "Greed is Good" ethos as a Freddy Krueger-like character who still haunts our society today—the architect of our Great Recession nightmares.

And here we are again in 2012 with more vampires. The "Twilight" series has boffo box office, and Johnny Depp is casting "Dark Shadows" over the socialscape as a vampire, as well. (Comic book heroes are breaking records, too, which grizzled elders should get a chuckle out of, remembering their superheroes of the 1950s.)

But the cycle is not so young; we can find the same monsters stalking our great and great-great ancestors. Edgar Allen Poe, H.P. Lovecraft and Nathaniel Hawthorne rose in popularity in reaction to the moral strictures of puritanical Protestantism. Mary Shelley's original Frankenstein tale, first published in 1818, was a cautionary tale about science dehumanizing humanity and eclipsing ethics and spirituality in its zeal to control the universe.

Light and dark in popular culture reaches back to Apollo and Dionysus in classical Greece. Camille Paglia called on those ancient archetypes in her seminal "Sexual Personae: Art and Decadence from Nefertiti to Emily Dickinson" (Vintage, 1991, $20). "Civilization requires a state of illusion," she wrote. The "focus on the pretty" is Apollonian; chthonian, "of the earth," and Dionysian, of the bowels, is its opposite. "It is the dehumanizing brutality of biology and geology, the Darwinian waste and bloodshed, the squalor and rot that we must block from consciousness to retain our Apollonian integrity as persons," Paglia wrote. Science and aesthetics attempt to "revise this horror into imaginatively palatable forms."

The point is this: Perhaps the return of vampires will allow us to confront the real monsters of our existence. They include genetically modified foods—aptly named Frankenfoods because we know not what such seeds and plants will do to our environment or as food to our bodies—and climate change, which, without global cooperation, will continue to run amok endangering the planet in ways no superheroes can fix.

Somewhere between the pendulous swing of chill bumps of fear and delight are the imaginative answers that can save humankind and Earth from the demons that assail us—especially those of our own creation.