Life as Prayer and Dialogue 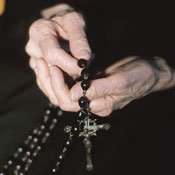 Much of the anger and dissension we see around us today is the result of the unpardonable practice of mixing politics and religion.

How can something so good (as its root, the English word "God" is identical with the Anglo-Saxon word for "good") have caused such cruelty and destruction?

Look closely, and you'll find a big distinction between religious doctrine (a precise, stated set of beliefs and rules) and faith (an expression of spirituality).

Those who follow doctrine will forever explain or rationalize or define matters of faith—or, in some instances, try to force their beliefs upon others through law. Arguments, wars and Inquisitions are just a few of the inevitable results.

Those who follow faith, if they truly live a life of prayer, live more thoughtful and less certain lives, because prayer requires listening.
In those who have achieved a life of living in faith—those who serve humankind, rather than exhorting others to follow a certain way—you will find faith in action and often accompanied by a sincere questioning.

A few years ago, the discovery that Catholic nun Mother Teresa admitted privately to a crisis of faith only months before she received the Nobel Peace Prize in 1979 caused a bit of a scandal. As Time magazine reported Aug. 23, 2007, she had written to a friend that her prayers seemed unanswered. "The silence and the emptiness is so great, that I look and do not see—listen and do not hear," she wrote. A later book of her correspondence ("Mother Teresa: Come Be My Light: The Private Writings of the Saint of Calcutta," Doubleday, 2007, $14.99) revealed that, for much of her life, Mother Teresa never felt the presence of God.

While people will discuss for decades the seeming dissonance between Mother Teresa's life of service and her years questioning her faith, it's not unusual for people of faith to experience a "dark night of the soul." The 16th-century Spanish mystic St. John of the Cross coined the term naming a common occurrence on the path of spiritual mastery.

Prayer is not stating faith as fact through absolute doctrines, but allowing the dialogue of spirit to enter. In this, faith is absolute, an allowance of spirit to guide. The questioning is not an absence of faith, but a part of faith: If there was no faith, there would be no questions. To not allow the questions would be a rejection of faith, or disbelief.

People who live a life of prayer have reverence for living things. They have a spiritual depth about them and are not so quick to judge. They tend to see a creator's hand in all they see and do—both in matters they think they understand and those they admit they do not—as part of the great mystery that is God.

For people of faith, it is not my God who creates the world and all things; it is the creator who creates all things, including me. That is a real difference that doctrine cannot touch for its simplicity and enduring power—one that builds humility, patience and strength. It is the iron faith of a Mother Teresa, even in a long silence in the dialogue of prayer.