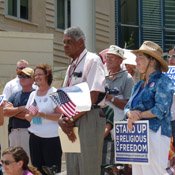 A group of people in Jackson gathered Friday to protest a rule under the Affordable Care Act that requires most employees' insurance plans to cover contraceptives.

About 60 people in Jackson took part in a rally Friday to protest a rule that requires health insurance for most employees to cover contraceptives.

The Jackson rally was part of a nationwide effort called Stand Up for Religious Freedom, which says at least 127 cities hosted rallies Friday, with more than 50,000 people participating.

Dr. Beverly McMillan, one of the Jackson rally's organizers, is the vice president of Pro-Life Mississippi. One of her objections to the contraceptive rule is that it requires insurance plans to cover forms of birth control, including the morning-after pill, that she believes cause early abortions.

"Forcing health-care institutions to provide that when it's against their religion is clearly an infringement of the First Amendment rights," she said.

The rule requires insurance providers, rather than employers, to pay for contraceptives, but some religious groups have objected on the grounds that religious employers must still facilitate providing the plans.

The debate is ongoing over whether and to what extent different forms of birth control prevent fertilized eggs from implanting, which many people in the anti-abortion movement consider an early form of abortion.

Recently, several Roman Catholic organizations in Jackson joined a nationwide lawsuit contesting the contraceptive rule, arguing that institutions affiliated with religious organizations, such as hospitals, schools and charities, should not be required to cover contraceptives in their employee insurance plans if they violate the organization's religious beliefs.

"Religious liberty is a gift from God," he told the group. "We talk about it as a right, but it's not a right first; it's first of all the grace of the almighty God given to us as a gift."

Friedeman said believing abortion is wrong but not doing anything about it is a misuse of religious liberty.

Bill Marcy, Republican candidate for the 2nd Congressional District, also spoke at the rally, saying he believes the Constitution was inspired by God.

"Our founders came from a long history of people who had made the decision that there is a greater power than thou," Marcy told the Jackson Free Press after the rally. "... Every once in a while, there's a break in history, which says human beings do not answer on basic freedoms to the government; (they answer) to that power that is greater than them."

On his campaign website, Marcy explains his opposition to the Affordable Care Act in economic, rather than religious terms. In lieu of the 2010 health-care law, Marcy suggests that America can improve its insurance system by allowing people to buy health insurance across state lines and letting free-market forces reduce insurance costs. He also suggests that passing additional tort reform laws will reduce costs.

Marcy adds that those without insurance can receive treatment at hospitals regardless of whether they can pay, so the health-care bill is "about how the progressive liberal socialist Democrats can control 18 percent of the economy."

"In this group (of uninsured Americans), the vast majority are young people who don't think they need insurance and would rather go to Cancun on vacation or buy $4,000 worth of automobile fancy rims or audio systems for their cars than to buy medical insurance," Marcy's website says. "Also in this group are millions of illegal aliens who should not be here in the first place. Unemployed people who have exhausted their COBRA insurance move in and out of this group."

The Supreme Court is currently considering the constitutionality of the Affordable Care Act, although its focus is on the law's individual mandate, which requires most people to purchase health insurance. That part of the law is scheduled to go into effect in 2014.

Stand Up for Religious Freedom has updated its estimates of the number of rally attendees nationwide and says it is continuing to tally the number of participants. More here for those who are interested: http://standupforreligiousfreedom.com/2012/headcount/