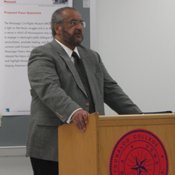 John Fleming, who is helping plan the Mississippi Civil Rights Museum, asked people to help the museum tell the story of the Civil Rights Movement.

To tell the story of the Civil Rights Movement in Mississippi as a whole, historians will need stories from individual people involved with the movement, museum planners say.

The state Department of Archives and History held a focal group meeting yesterday evening to discuss plans for the Mississippi Civil Rights Museum, which will be built near the Old Capitol.

Angela Stewart, interim project manager, said organizers and legislators hope to have the museum open in time for Mississippi's bicentennial celebration in 2017. The museum will cover the Civil Rights Movement around the state during the period from the end of World War II through the 1960s.

"Mississippi has a rich civil-rights history all over, and the museum will share that history," she said.

The museum is in the planning and design phase right now, and organizers are asking from input and stories from people around the state.

John Fleming, director of the International African American Museum in South Carolina, said the people he has talked with want to see a museum that discusses the pain of Jim Crow laws as well as the Civil Rights Movement that fought against them.

"This is an opportunity that we're not given very often," he said.

After the Civil War, ex-slaves did not want to talk about slavery, and most historians did not document their experiences until the 1930s, when people who remembered early African American culture or even their time in Africa had died.

"We ignored it. We not only tried to cover up the harshness of slavery, we created a system that replaced slavery--Jim Crow," Fleming said.

While America missed out on recording and learning from that portion of its history during the 19th century, Fleming said the Mississippi museum is an opportunity for people--both black and white--to face and come to terms with the injustices of segregation. Mississippi has a chance to get the story right, but museum organizers will need to document individual stories of "foot soldiers" in the movement.

To tell the story of the Civil Rights Movement in Mississippi, people planning the museum will need stories and artifacts from people living in the state at that time--oral histories, church bulletins, school uniforms, living room furniture--all the things that place the individual stories of the civil rights movement within the context of everyday life.

"I believe the Mississippi Civil Rights Museum can be the most significant museum that comes online in the 21st century," Fleming said. "... It's not a museum that outsiders can just come in and create."

Officials had discussed Tougaloo College as a potential location for the Civil Rights Museum and the Jackson Redevelopment Authority suggested a site near Farish Street, but the current plan calls for the museum to sit between the William F. Winter Archives and History Building and the site where the Museum of Mississippi History will be built on North Street.

Organizers plan to have a website up by mid-February so that people can post stories or suggest artifacts to include in the museum. For now, people can contact MDAH's Museum Division at P.O. Box 571, Jackson, MS, 39205 or [e-mail missing].

I can't wait for this museum. It's gonna be great! So, is North Street is definitely the final site location?

Unless something changes, I guess. The current plans have the MS history museum and the civil rights museum sharing a lobby or courtyard or something like that.

An excellent reference book is "Local People, The Struggle for Civil Rights in Mississippi" by John Dittmer. It's taking me forever to finish it because there are nuggets of information in every line. It highlights the experiences and work of so many brave people closest to the struggle. Someone should get a copy of the speech given by Dr. Robert Smith at Dr. Rose McCoy's funeral, it was full of wonderful information about the civil rights struggle right here in Jackson.