Mississippians Headed to the Big Game 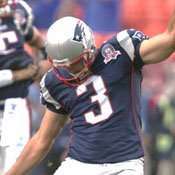 Mississippi was going to be well represented in the Super Bowl regardless of which teams remained after the NFL Playoffs last Sunday. All four teams on the gridiron had players from our state.

Even the two teams that lost had some Mississippi flavor. The San Francisco 49ers boasted Patrick Willis from the University of Mississippi and Anthony Dixon from Mississippi State University, both Conerly Award winners. The Baltimore Ravens had Parnell McPhee from MSU and Michael Oher from Ole Miss.

Six players with Mississippi ties are in the mix for a Super Bowl title on the two teams left. It would have been seven players, but Stacy Andrews, guard for the New York Giants, is done for the year due to pulmonary embolisms in both his lungs. Andrews was a backup offensive lineman, and doctors expect him to make a full recovery and resume his playing career.

The New England Patriots have the most players with Mississippi ties on their roster. Two players played high-school football in Mississippi; one is from MSU and one from Ole Miss.

Rookie running back Stevan Ridley attended Trinity Episcopal High School in Natchez. Ridley was considered the sixth best overall football player in Mississippi and 21st overall in the country by sports webstite Rivals.com his senior season. Ridley went to Louisiana State University to play college football. He left after his junior season to declare for the NFL Draft where the Patriots selected him on the 73rd overall pick in the third round of the 2011 draft.

Baseball is where Gostkowski got his start in college with a partial scholarship. He walked on to the football team at the University of Memphis and earned a full scholarship because of his kicking abilities. New England drafted Gostkowski with the 118th overall pick in the fourth round of the 2006 NFL Draft. He faced major pressure as a rookie replacing Patriots kicking legend Adam Vinatieri who had signed with the Indianapolis Colts as a free-agent. Vinatieri was known for his game winning kicks in big playoff games and Super Bowls. Gostkowski made all eight of his field-goal kicks in the playoffs as a rookie.

BenJarvus Green-Ellis will represent the Ole Miss Rebels in the Super Bowl. Green-Ellis has earned the nickname "law firm" because of his multi-part name. Green-Ellis came to UM after he transferred from Indiana. His senior year he rushed for 1,137 yards for the Rebels with five 100-yard rushing games with six touchdowns. He is just the second running back in Ole Miss history to rush for 1,000 yards in back-to-back seasons. The Associated Press selected Green-Ellis for first team All-SEC his senior season.

Green-Ellis' path to in the NFL was not straightforward. New England signed him as an undrafted free agent in 2008 right out of college. The team moved him to the practice squad and called him up to the 53-man active roster in October of that year. Once he made the active roster, Green-Ellis started three games and played in nine others. He finished his rookie season with 275 yards and five touchdowns.

The final Patriot with Mississippi ties is defensive tackle Kyle Love from Mississippi State. Love is part of the defensive-line rotation for New England, where he backs up nose guard Vince Wilfork in the 3-4 defense (three down defensive linemen and four linebackers). When New England is in the 4-3 defense (four down defensive linemen and three linebackers), Love moves to defensive tackle and starts opposite Wilfork. Love had 33 tackles and three sacks this season.

Love made 34 tackles his senior season with MSU in 2009, and the Patriots signed him as an undrafted free agent in 2010. He played in nine games his rookie season and in all 16 games this season.

Two Conerly winners are on the New York Giants roster. Both quarterback Eli Manning and linebacker Michael Boley won the award. Manning, who played for Ole Miss, won: in 2001 and 2003.

Manning broke all his father's records at UM before the end of his college career. He is only the fifth quarterback in SEC history to throw for more than 10,000 career yards in college. Manning set 47 school records (game, season and career) before he left school.

Former Southern Miss Golden Eagle Michael Boley won the Conerly Trophy in 2004—the year after Manning left college—and was named Conference-USA defensive player of the year. The Giants signed Boley as an unrestricted free agent in 2009 after he started his career with the Atlanta Falcons.