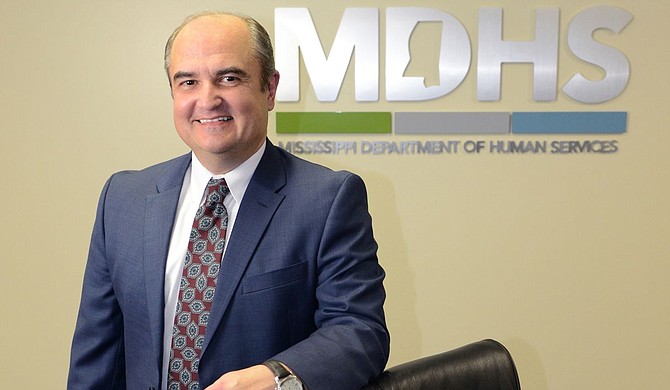 John Davis, a former Mississippi Department of Human Services director, has been indicted on 20 additional felony charges tied to allegations that he participated in misusing money that was supposed to help some of the poorest people in the nation, including some spent to send a former pro wrestler to a luxury drug rehab facility. Photo courtesy MDHS

JACKSON, Miss. (AP) — A former Mississippi Department of Human Services director has been indicted on 20 additional felony charges tied to allegations that he participated in misusing money that was supposed to help some of the poorest people in the nation, including some spent to send a former pro wrestler to a luxury drug rehab facility.

John Davis of Brookhaven has pleaded not guilty to the new charges of bribery, conspiracy and making false statements to the government. The indictments were unsealed this week, days after he entered the plea.

In early 2020, Davis and five others were charged in what the state auditor called the largest public corruption case in Mississippi in the past two decades. Davis and some of the other defendants are still awaiting trial.

Davis was a longtime Department of Human Services employee who was chosen to lead the agency in 2016 by the Republican governor at the time, Phil Bryant. Davis retired in July 2019.

Like the previous charges, many of the new ones against Davis are connected to federal money from Temporary Assistance to Needy Families, which the Department of Human Services paid to nonprofit education organizations run by mother and son Nancy New and Zachary New.

The new indictments allege those organizations, with Davis' knowledge, paid $160,000 for drug rehabilitation in Malibu, California, for former pro wrestler Brett DiBiase; that Davis hired DiBiase for a Department of Human Services job that required a college degree, knowing DiBiase did not have a degree; and that the department paid DiBiase $48,000 for work he did not do.

Court records show a Hinds County grand jury issued the latest indictments on April 8. An April 12 court document showed Davis pleaded not guilty to all the charges, as he had to the previous ones. Hinds County Circuit Judge Adrienne Wooten set a Sept. 26 trial date on the new charges.

DiBiase pleaded guilty in December 2020 to one count of making a false statement. He said in court documents that he had submitted documents and received full payment for work he did not complete. He agreed to pay $48,000 in restitution, and his sentencing was deferred.

Mississippi Auditor Shad White has demanded repayment of $77 million of misspent welfare funds, including money paid to retired NFL quarterback Brett Favre, who lives in Mississippi. Favre has not been charged with any criminal wrongdoing.

White said Favre received $1.1 million for speeches but did not show up for them. Favre has repaid the money, but White said in October that Favre still owed $228,000 in interest. In a Facebook post when he repaid the first $500,000, Favre said he didn’t know the money he received came from welfare funds. He also said his charity had provided millions of dollars to poor children in Mississippi and Wisconsin.

A recent series of investigative reports by Mississippi Today has focused on the corruption case, including private communication between Bryant and Davis about Human Services programs. The NAACP has called on the Justice Department to investigate spending in the Department of Human Services. Nancy New and Zachary New were indicted in March 2021 on federal charges of fraudulently obtaining money from the Mississippi Department of Education. They are awaiting trial.