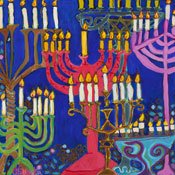 Michael Steiner screened about three dozen films for the upcoming Jewish Cinema Mississippi 2012 film festival. As co-chairman of the January event, he and the other screening committee members narrowed that batch of 30-something movies down to four that they consider to be the best in recent Jewish and Israeli-themed cinema.

"They've all come out in the past two years and done well at festivals," Steiner said of the choices.

It's the 10th year that the Jewish community in Jackson has put on a film festival. The event has changed in significant ways. In previous years, the Goldring/Woldenberg Institute of Southern Jewish Life sponsored the Jackson Jewish Film Festival, as did Beth Israel Congregation and the Jewish Culture Organization at Millsaps College. This is the first year that Beth Israel and the JCO are holding a film festival independent from ISJL. (ISJL holds several regional film events each year.) Also, past festivals were at Millsaps, but this year's festival will show 35 mm films at Malco Theater in Madison.

"Malco approached us," Steiner said. "We interpret that as recognition we had come of age. It could expand the base of people we appeal to."

Steiner said the high-quality films are more about the similarities between people. "It will spur discussion," he said.

Jewish Cinema Mississippi 2012 is Jan. 25 though Jan. 29. All shows are at Malco Grandview Theater (221 Grandview Blvd., Madison). Tickets for each film are $10 and a festival pass is $35. Buy tickets at the door or at http://www.jewishcinemams.com.

Four overweight friends are fed up with dieting and the weight-loss club they belong to.

When Herzl (340 pounds) loses his job as a cook and starts working as a dishwasher in a Japanese restaurant, he discovers the world of Sumo, where large people are honored and appreciated. Through restaurant owner Kitano, a former Sumo coach in Japan, he falls in loves with a sport involving "two fatsos in diapers and girly hairdos."

Dan chooses to work on the land, living on a kibbutz in the south of Israel. His orthodox brother Aaron is an American attorney and a distinguished Torah scholar who comes to Jerusalem to reacquaint himself with his secular brother and work on an explosive trial dealing with the conscription of fundamentalist Jewish students into the Israeli army.

A family of seven Romanian dwarves runs a theater in the seedy area of town. This is where Yankele, a Holocaust survivor and a matchmaker, has his office. Arik, a teen who works for the matchmaker, falls in love with a free-spirited girl who has just returned from America and speaks of women's rights, free love and rock 'n' roll. The disparate parts of Arik's life collide.

This documentary explores the connection between Jewish Americans and baseball. More than a film about sports, it is a story of immigration, assimilation, bigotry, heroism, the passing on of traditions, and the shattering of stereotypes. Interviews include fans, writers, executives, and especially players—including Al Rosen, Kevin Youkilis, Shawn Green, Norm Sherry, Ron Blomberg, Bob Feller, Yogi Berra and the legendary Hall of Fame pitcher Sandy Koufax. Dustin Hoffman narrates.