Why Not the Scott Sisters? | Jackson Free Press | Jackson, MS

Why Not the Scott Sisters? 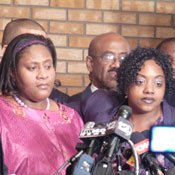 Sisters Jamie and Gladys Scott must lose weight before doctors will consider them for a kidney transplant.

After former Gov. Haley Barbour pardoned more than 200 people at the end of his term earlier this week, supporters of Jamie and Gladys Scott say they don't know why the sisters weren't also given full pardons.

Chokwe Lumumba, the sisters' attorney, said at a press conference this morning that he is asking Gov. Phil Bryant to give the sisters a full pardon since Barbour did not. Lumumba said he does not know all the details of the pardons, but he questioned why Barbour pardoned murderers and not the Scott sisters.

"If you can find a way to pardon over (200) people ... it seems to me that you could find in your heart and in your law to pardon these two women," he said.

Last year, Barbour suspended the sisters' sentences for robbery with a deadly weapon after pressure from the NAACP and other groups. Jamie and Gladys Scott served 16 years of a life sentence and wanted to get out of prison in part so that Gladys could donate a kidney to Jamie, who suffers from kidney failure and is on dialysis. Lumumba said Gladys has not yet been able to donate her kidney because of medical reasons.

Although the Scott sisters have been out of jail for more than a year now, they are still required to report their movements to supervisors and are not allowed to leave Florida, where they live now. A suspended sentence restricts the sisters' mobility and job prospects and means they could go back to prison, Lumumba said.

"With a suspended sentence, you're constantly under the supervision of the state," he said.

In a statement last night explaining his pardons of people still in prison and those who already left, Barbour stated: "The pardons were intended to allow them to find gainful employment or acquire professional licenses as well as hunt and vote."

Supporters of the Scott sisters are planning a demonstration to ask for a full pardon on April 4, the anniversary of Martin Luther King Jr.'s assassination.