[Editor's Note] Grow Old With Me 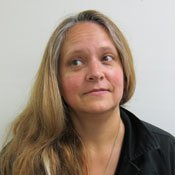 The longest day of my life started on a tropical island. It was oh-dark-thirty, so early in the morning that it was still night. I had only taken a short nap following a goodbye party on the beach. The palm trees stirred in the warm sea breeze as I left Guam on my flight. I spent the night in Tokyo, crossed the international date line and landed first in Seattle, then later in Spokane, Wash., all on the same day: Jan. 9, 1986.

The guy I was dating took me to the airport. It was pretty clear things were over. We were in the military, and I had a new assignment. His orders were taking him to Europe. Neither one of us seemed too shook up about going our separate ways.

A week into the new year and somewhere over the Pacific Ocean, I was firm about my resolutions. When I got to Washington state, I wouldn't drink as much. I would go back to school. I would work for awards and honors. I would buy a car. In 1986, I would not fall through the door of the first cute guy I met. I smiled as the plane landed. I thought I had my whole life fixed.

Spokane in the dead of winter shocked me. I thought I had landed in frontier Alaska covered with snow. I could see no bushes, no curbs, no painted lines in the highway, no sidewalks, no real signs of life. Just snow. A new co-worker picked me from the airport and told me some folks in our squadron were throwing a party that night.

I couldn't resist checking out these new people. We pulled into a small trailer park covered in thick white. It was silent, the night was dark, I was cold and not totally sure this adventure was worth it. My shoes crunched ice puddles in the driveway.

Then the door burst open with loud music, bright colors and lots of laughter. I had no idea so many people could fit in a trailer. I was impressed that most of the space was a continuous bar. The girls wore pastel sweaters and leggings. I thought I had left pastel behind in the Pacific, but what I didn't understand was that I was still in 1986.

So many people introduced themselves, and so many of them offered me drinks. One guy walked up, grabbed my upper arm and said, "Hi, there." Pretty innocent, but to this day I can still feel his fingers on my arm.

He was the life of the party. Everyone wanted to talk to him. Anyone he talked to laughed. He could dance. It was an instant attraction for me, but I was resolute about being good for at least a few days more.

I kept finding reasons to talk to Brett and hang out with him and his buddies. He was smart, articulate, a little bit older than me. We became friends, and he showed me around Spokane. I thought driving through the snow was like space travel with stars whizzing by and hitting the windshield. This amused him. He took me to bookstores. I told him about my favorite writers over dinner. Then one day he bought me a used copy of "The Awakening," by Kate Chopin, proving that he was the first man in my life who had ever listened to me. It took only a month before we became something more than friends.

That's how I met my husband. We dated for a year, then got married in March 1987. We argue every year over the exact date. I thought for a few years it was March 6, then realized it was more likely March 7. He has been insisting ever since Hurricane Katrina that it was March 10. It's not that difficult for us to figure out the correct date, but squabbling about it has become a family tradition.

Our wedding date doesn't matter all that much. The intense friendship, the deep trust, the shared challenges are all the things that make us something more together than we ever could be apart. We'll be married 25 years this March. Our children are grown and starting their own lives. Yet, Brett is still there. Our relationship is the main one in my life. The two of us alone are a family.

It's become a modern cliche to say you can't choose the family you are born into, but you can choose the family you make as an adult. The profound reality is this has always been true in all cultures in all times. It's always been about two people coming together. It's the root of spirituality. (Even if you argue that true spirituality is about separating yourself from others, you had to start that journey connected at the hip to someone.)

My mind has twisted romance tales together so that I contort ideals of Heloise and Abelard with the myth of Tristan and Isolde. The legend of a rose and an intertwining vine that sprout from the tragic lovers' graves is the type of crazy idea that leads people to want storybook weddings and dream of lacy dresses and blooming flowers. This isn't about logic. It's about mystery and intuition, it's about sometimes making impulsive choices that affect the rest of your life. And, as with Heloise and Abelard, it's making peace with your choices.

Although I recognize that most people are good and want to be fair and kind, the hard truth is I'm a cynic and a pessimist. My half-empty water glass is a lens depicting a lonely world full of mean people and harsh circumstances. To have a friend helps. To have an ally you call husband is a gift I treasure. To have just one person in your life who understands you, knows you well and always offers you a safe harbor is worthy of a mighty celebration.

Of course, when you are in love, the fascination of how your feet fit together seems enough of a reason to throw a large party. And when you are young, you probably aren't that interested in advice warning you about demanding a perfect wedding. But here it is anyway: No one has ever had a perfect wedding. Things will go wrong. Your family will fight, or the flowers will wilt. The groom might flub his lines, or the bridesmaid might be a diva. The ceremony itself could last 15 minutes tops. Expectations will be so high, someone will screw up.

After the vows is the time that really matters. As the magic of romance wears off, you will change with every obstacle you meet. If you pay attention, you can grow together in that evolution. Sometimes you might trip over each other in clumsy attempts to get through life. But the truth is, the two of you are intertwined. This is the heart of the human experience. Honor that magic.

I agree. Just beautiful. What a love story!

I think ti's cute that you guys aren't sure about the anniversary date. Instead of fighting about forgetting it, you fight about when it is! LOL

I hope that bodes well for Ben and I then. Neither one of us can remember what day we got married either. And, its also a yearly fight about whether or not its December 17th or 18th! (Never thought there was someone else that actually did that!!!) So nice to hear that 25 years later you guys are still doing the same thing. Congrats!

Just lovely. Thank you for sharing this.

You all are too sweet. It's always intimidating sharing personal stuff. Thanks.