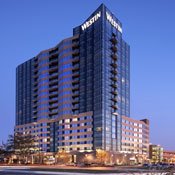 Jason Brookins, executive director of the Jackson Redevelopment Authority, has the go-ahead to do whatever it takes to get the land across from the Jackson Convention Center out of the hands of developer TCI MS.

The JRA board voted Dec. 28, after a lengthy executive session, to give Brookins the authority to take any action regarding the sale and redevelopment of property meant for TCI's now defunct plans for a convention center hotel. Pearl, Pascagoula, Farish and Mill streets border the downtown lots.

"The first step is to negotiate a settlement," Brookins told the Jackson Free Press. The city and JRA made its initial agreement with TCI in 2007. "Because TCI wanted to develop a hotel, we did things to assist them."

Part of that help included securing a $7 million federal Housing and Urban Development loan designed to encourage urban economic growth. Brookins said he couldn't comment on reports that TCI never made any payments on that loan. TCI did ask for more funding with bonds, however, asking the city and JRA to foot 100 percent of the bill.

The complications and questions multiplied, culminating in JRA's end-of-the-year push to open a new request for proposals. TCI and one other company, Journeyman Austin Holdings, submitted proposals in December. The JRA rejected both, despite the temptation of possibly securing Gulf Opportunity Zone bonds, or GO-Zone bonds, no longer an option after Dec. 31. The JRA will put out a new request for proposals in the first quarter of 2012 with no promise of GO-Zone backing.

Not only is JRA going back to the drawing board with new proposals, other projects unrelated to the convention-center complex are popping up. They even include a luxury hotel, separate from convention-center plans.

Joseph Simpson is planning to build a high-end hotel in downtown Jackson. He would develop a site near the federal courthouse and also re-open the Iron Horse Grill a few blocks away. Simpson briefly described his development projects to the Jackson Redevelopment Authority board Dec. 28 during the group's regular monthly meeting. His intention is to get $15 million in bonds from the JRA to help fund work for both projects.

"I've been working on this for a couple years," Simpson said during a break in the meeting. He said he hadn't taken the story to the media before last week's meeting because he wanted to work out all the details first.

Simpson said his group, Capital Hotel Associates LLC, plans to build a $55-million, 205-room Westin hotel facing Congress Street. It would be a full-service luxury hotel with amenities such as a spa. Plans call for a nine-story structure on the property where the Mississippi Valley Title building now stands at 315 Tombigbee St. Simpson said crews will have to demolish the old building.

The total cost of re-opening the Iron Horse Grill and building the Westin hotel comes to $61 million, Simpson said. He is asking the JRA for $12.5 million in bonds for the hotel and $2.5 million in bonds for the restaurant. The board did not vote on the bonds and won't until the initial vetting and application process is complete. Brookins said this would include examining financial agreements of Capital Hotel Associates.

Simpson is working with Minnesota-based Wischermann Partners on the concept of the hotel. Wischermann operates the Westin Galleria hotel in Edina, Minn., and Simpson said it would operate the proposed Jackson hotel. The architects, construction companies and other members of Capital Hotel Associates are local, Simpson told the JRA board.

Capital Hotel Associates would also use New Market Tax Credits to fund the developments as well as personal investments. Congress created those credits in 2000 to spur new or increased investments into operating businesses and real-estate projects located in low-income communities.

Simpson told the board he'd also like to put some money toward developing a trolley system downtown. "It is something that will change the perception of downtown," he said.

Before Simpson spoke, board member Brian Fenelon mentioned for the sake of disclosure that he worked with Simpson but had no knowledge or interest in Capital Hotel Associates.

The board also discussed creating a strict policy to vet the professionals and consultants it hires. The desire for change is due in part to the many complicated relationships revealed in the TCI convention center hotel deal. For example, Porter Bingham of the Malachi Group is a financial adviser for the city of Jackson who also consulted TCI. In the future, the JRA wants to avoid that type of conflict.

A committee is working on a specific process for identifying any potential conflicts of interest or qualification issues. The board will vote on the policy at a future meeting.