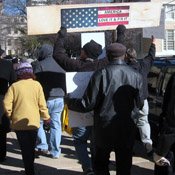 Protesters marched to the Capitol this morning to draw attention to various causes as the 2012 legislative session kicks off.

Holding signs above their heads and chanting, "Whose Capitol? Our Capitol!" protesters from several civil rights and union groups marched to "occupy the Capitol" during a rally this morning.

About 40 people gathered at Smith Park with a collection of concerns for state legislators. Today marks the start of the 2012 legislative session. From the park, the protesters marched to the state Capitol, chanting slogans of the various groups represented at the rally. Several demonstrators tried to engage passers-by to march with them, with limited success.

James Parker, a supporter of Occupy Jackson, said his main concern is the influence that large corporations can have on politics by donating to political candidates and lobbying.

"Our representation has been taken away from us as a people and as citizens of this country," he said. "... (Corporations) are buying elections, essentially."

Contrary to the infamous Citizens United Supreme Court decision, which ruled that the government cannot limit how much corporations and unions can spend for political purposes, Parker said money should be for trade, not a form of speech in elections.

Jackson Public Schools board member Ivory Phillips held a sign saying, "We are the 99 percent!" as he marched with the protesters. He said he is concerned about a number of issues.

The Legislature may stay in session through May. This year is the first time since Reconstruction that Republicans have held a majority in the House. Read this week's issue of the Jackson Free Press, on newsstands tomorrow, for a detailed analysis of the laws likely to be up for debate in the 2012 session.