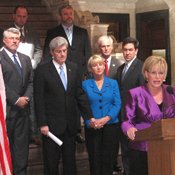 Lawmakers and abortion opponents came together at the Capitol yesterday to support anti-abortion efforts, making their way through various committees in the Mississippi Legislature.

Abortion opponents have priorities beyond high-profile personhood legislation. Herring said she hopes legislation will "remove loopholes" from parental consent requirements for minors to get abortions. She also wants minors to receive counseling before they get a judicial bypass of the parental consent law, partly to ensure that no one is forcing teens to get abortions.

"Let us go forward today, supporting each piece of this legislation that comes before this body."

Rep. Andy Gipson, R-Braxton, introduced House Concurrent Resolution 61, one of several attempts to put personhood back on the ballot. The resolution would apply the word person to "all human beings from conception to natural death."

After the press conference, Gipson confirmed to the Jackson Free Press that he considers conception to mean fertilization.

Atlee Breland, founder of Parents Against Personhood, said the resolution would amount to an effective ban on in vitro fertilization and common forms of birth control, including the pill. Still, she said the measure would have to receive a two-thirds vote in both houses before it could go voters on a ballot. Mississippi soundly defeated a similar ballot initiative last November.

If there's one thing a blastocyst wants, it is to pursue happiness.

It would be a great idea if our Gov. & Lawmakers would focus on the "life, liberty and persuit of happiness" for persons of the State of Mississippi. When you hear statements like these from this group, it makes you wonder if they have any idea about the needs of the people and how to practice good governance.

Tee hee...Brian made a funny. Could've easily substituted zygote or morula... For Governor Bryant to say that this is not about politics or votes is, well, asinine. Everything these "politicians" do is calculated as far as their small minds can (I picture doodles on cocktail napkins at the Sun-n-Sand). Their "job" is to uphold the laws of this State and defend our State and National Constitutions! Their job is not to impart their morality onto our lives...