[Queen] If I Were A Man | Jackson Free Press | Jackson, MS 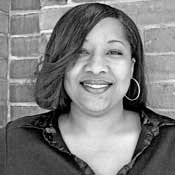 This is how to have worthwhile dialogue with me: I expect an opportunity to speak and an open-minded willingness to listen. Let what I say stir around in your head. If it makes sense, great; if it doesn't, convince me that it has no merit. I don't need your sympathy, and I don't speak to have you agree with me.

I'll venture to say that most women's expectations of verbal communication don't vary much from mine. I've had my share of conversations with men that left me feeling that what I said was insignificant to them. I'm sure many women have been in the midst of conversations with men and found that the men were talking to each other, allowing the woman to chime in here and there, just to be nice.

Damn being nice! Talk to me, and allow me to talk to you.

Recently, I sat with two men having a conversation about politics. Now, I'll be the first to say they were more informed on the topic than I. But these men talked for hours and never noticed that I was not participating. I heard everything they said, and I watched them closely. But I could see that they were so heavily involved in the conversation that they didn't even notice me. Many questions came into my head, but few had anything to do with what they were talking about:

If I were a man, would they turn to me for input, or would I be just as overlooked?

If I were a man, how important would it be for me to participate in the conversation?

If I were a man, how much time would have passed before they noticed that I wasn't included in their conversation?

Men go far today to portray the "I love women and respect women" line. Most learned it from their mothers. But, deep down, I believe many still suffer from the same male superiority complex that has plagued women consistently throughout history. I realize that's not something a man wants to own up to, but I think it's safe to say that it's true for most men.

It gets worse when you are dating or married to a man with a public voice—one people hear often.

Some of my husband's ex-colleagues intimated that I should be seen and not heard. I suppose they meant that my husband should be the only one who speaks for our family. I wondered about that. I never want to make my husband look bad, and I don't want anyone to judge him based on something I've said.

Besides, when I was growing up, my father always had the strong voice, not my mother.

I took my concerns to my husband who quickly reminded me that he didn't want a puppet or a trophy wife. If he did, he said, he wouldn't have married me.

With his blessing, to those people I say, "Get the (expletive deleted) out of here!"

As a black woman in one of the most racist states in the nation, I have my own struggles. I have fought just as many battles, if not more, as my husband. The same validity that you find in his strong, powerful voice, you can rest assured resides comfortably in mine as well—my voice is just a little softer. But listen close, because I might be more detailed than my husband, so you might understand me a little better.

My journey isn't any less valuable because I was born into this wonderfully curvaceous, feminine body. As a matter of fact, I believe women deserve greater respect just based on our physiology. I don't know a man who would survive monthly menstrual cycles or childbirth.

I honor my husband. I love him, and I stand beside him, not behind him. I honor him because he honors me.

Men, this is not the 1920s. But women hear you screaming even though you do it in subtler ways now—like the way you try to keep us "in line" in the workplace by not paying us the same as men, not promoting us as you do men and not selecting us to supervise men.

You even try slapping us around legally, now and then, to see if we're paying attention (e.g. the Personhood Initiative).

So, to those who wish to put a muzzle on the Queen, hear this: I was born to shine, and I will do so. I will never ease off into the sunset because you think I am not womanly. I am as much a woman as you are a man, and I'm happy to be so.

I am not who I am today because I am someone's wife.

Funmi Franklin, aka Queen, is a word lover and poet. She's a reality-show fanatic and is awaiting an opportunity to star in her own show to be titled, "The Queen & I."