One for the Guys | Jackson Free Press | Jackson, MS

One for the Guys 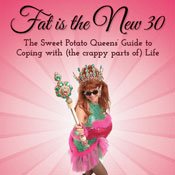 The idea behind this review was twofold—to get a man's perspective on the latest Sweet Potato Queen book and to do a bit of a combo review of "The Dummy Line," a novel by Mississippian Bobby Cole whom Browne's husband, Kyle Jennings, represents.

Put another way, this review is for the men. It's for those who don't generally read Jill Conner Browne's best-selling Sweet Potato Queen books and might be interested in knowing if they would enjoy it. It's for people who would love a good thriller chase through the woods where a father has to defend his daughter from a band of psychotic thugs out for revenge. (Read my upcoming review of "The Dummy Line" in the JFP for more.)

Now, for those SPQ fans who have continued reading, don't worry. This review is not nearly as bad as my qualifiers make it sound. In fact, I laughed heartily at and identified with several of the yarns throughout "Fat Is The New 30: The Sweet Potato Queen's Guide to Coping with (the Crappy Parts of) Life" (Amazon Publishing, 2012, $14.95).

If you enjoy bold, irreverent and sometimes crude humor—and most men do—then you'll find plenty to keep you turning the pages. But there is much more to what's in here than a few lines about how a bummed-out birthday boy can't be cheered up on his special day—even by sexual favors, a fart joke or two, and a recollection about a news story detailing a naked guy falling through a ceiling.

What Browne writes here has heart and soul, and if you are a man who loves southern women—and most men do—then you will appreciate the heart and soul of her writing along with the humor.

The hardest part for men may be getting through a book that reads like a women's gossip circle, where boisterous women tell tales and guffaw and call names. In real life, it's a circle to which men are generally not invited and usually would never seek to enter.

Granted, we men have our own form of said circle. In some ways, we can relate. So, to help my fellow first-time male readers of a Sweet Potato Queens book along, I offer this tidbit of advice: Put yourself in the mindset of a large camping trip with good friends and family. It's later in the evening, a few good beers into the conversation when everyone's a bit loosened up. Then, allow Jill Conner Browne to hold court. She's good at it.

Browne's great achievement with this book is simply being able to bring humor and fun to some stories that clearly are not humorous. The birthday boy story includes an accident with his son, an unrelated suicide and a friend battling cancer. Granted, there is little depth of discussion to these stories, but the point is clear: Humor makes it easier to relate to life's lessons.

Nonetheless, in doing the review, I found several of my male friends who have read and enjoyed a few of Browne's books. I'm not to a few, yet, but on this one, you can count me among them. This is fun, light reading. It's not my first choice to pick off a shelf, but it's certainly enjoyable enough to be picked up eventually.

I've been gratified to read that, since the publication of The Sweet Potato Queens' Wedding Planner and Divorce Guide, Divorce parties have become quite the rage, all over the country. I take total credit for this, and you're welcome.

I believe we can take the whole Divorce Experience even further, though. After all, it's not just about a good excuse for a party. I think it's time to write, take and devote oneself to a set of personalized DIVORCE VOWS.

I daresay these may even be perhaps more important than the ones we took pre-Divorce. These are vows we need to make to OURSELVES. If properly made and kept, one might expect to live out the rest of one's day happy—AND unincarcerated.

For instance, we would definitely need to include a solemn—perhaps blood—oath to ourselves that we would absolutely Be MORE Particular in the Future. In that vein, Queen Sheila has publicly sworn that, in the future, she will absolutely abstain and refrain from dating any man who has or does any or all of the following:

• hips wider than his shoulders
• eyes only an inch apart
• is 40 and lives with his mama (and she is NOT an invalid)
• starts sentences with, "I think you (should, are, ought)..."
• has a pet monkey

OR last, but definitely not least, in my opinion:
• walks on his tiptoes (ewww)

Now, she swears that there is positive proof that she did, in fact, encounter these qualities in a man or men (surely, they weren't ALL one guy, because that would beg one helluva question, in my opinion, and I'm sure you agree), but I have not personally seen this proof. Even without photographic evidence, I think we can prolly agree that these traits would and definitely should be sufficient to, at the very least, Give One Pause before accepting attentions and/ or invitations from such an individual.

And those erstwhile Wedding Vows? The ones where we promised to love, honor, and cherish that Other Person (who, it should be noted, ALSO promised to do the same for US—and we see how well THAT worked out). What if we were to make and keep those vows—to OURSELVES? Ah, and if we added "Be Particular" to that list, what a wonderful world it would be.