What's on My Nightstand? 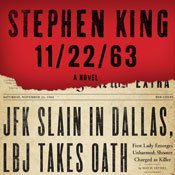 "Zero Day" by David Baldacci (Grand Central Publishing, 2011, $27.99). I've enjoyed David Baldacci's other books, and this one introduces a new character he is expected to create a new series around.

"The Long Tail" (Revised and Updated) by Chris Anderson (Hyperion, 2008, $15.95). Several people have recommended this book to me. It's a look at how the Internet has changed retail sales in niche markets.

"Thinking, Fast and Slow" by Daniel Kahneman (Farrar, Straus and Giroux, 2012, $30). Recommended to me as an interesting look into how people think and make decisions. Intriguing.

What I'm Looking Forward To Next: I'm waiting for Michael Connelly's next Harry Bosch novel, "The Black Box" (Little, Brown and Company, November 2012, $27.99).