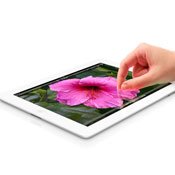 Earlier this month, Apple CEO Tim Cook took center stage in California to unveil the newest model of the iPad. For months now, tech writers have been speculating about what the new iPad would include, and for the most part, Cook presented few surprises.

For some, "pixel density" doesn't seem like an issue. "My screen is just fine," they say. And that may be true, especially for a phone. However, I suspect that on the iPad, it's going to be a tremendous plus. This is akin to watching a football game in HD versus tired, ol' digital cable.

Just as the Kindle is a tremendous reading experience because of e-ink technology, the iPad with its retina display is set to be even better—at least when glare is not an issue. You literally have to "see it to believe it," which I haven't yet.

Other new additions include LTE connectivity bringing 4G speeds to the iPad, an improved 5-megapixel camera with backlight sensor, HD video recording, voice dictation for text input and the ability to turn the iPad into a personal hotspot.

All things considered, it's a pretty modest update. In fact, if you just read the previous paragraph, it doesn't sound like much at all. But, dear reader, I cannot stress enough what having the retina display on the iPad is going to be like. That alone is enough to make me look at buying the new model.
But I'm not—at least not right now. The iPad 2 is a tremendous device, and it is a workhorse for me. While I'd love the retina display, I'll make do.

Apple has settled into a set release pattern with their iOS devices. One release is a monumental update, complete with new hardware design and breakthrough features (such as the iPhone 4 with its new design and the retina display). The following release is more of a build-on release. It includes the same form-factor but throws in some really cool under-the-hood improvements (such as the iPhone 4S that brought about Siri and a much faster processor).

The company followed the same pattern with the iPhone 3G and the iPhone 3GS. The 3G was a brand new hardware design—albeit the worst of the three designs, in my opinion—coupled with 3G connectivity, and the 3GS added a speed boost and some cool GPS tools.

The iPad 2 was a tremendous redesign. It included a faster processor and introduced 3G models that worked on both AT&T and Verizon. Now comes the new iPad (not the iPad 3 or the 2S, just iPad), which has mostly the same hardware design, though it is ever so slightly thicker. The real update is under the hood.

Apple is able to settle into such a comfortable release scenario because they are so far ahead of the competition. The iPhone remains the most popular single phone in the world. The iPad is even further ahead of its competition. Apple created the tablet market as we know it today with the iPad. And so far no one—and I mean not a single competitor—is offering anything close to what the iPad offers.

My buyer's advice? If you have the iPad 2 and are happy with it, stick with it. Only make the purchase if you might use the dictation capability or if you do a tremendous amount of reading and are craving the retina display. It'll be worth it. Otherwise, the iPad 2 will be just fine.

Finally, if you are looking to buy your first iPad, then you can choose between the iPad 2 or the new iPad. Despite the $100 difference, it's a no-brainer. The new iPad is the obvious choice. The retina display alone is worth the extra $100, and all the other goodies are just gravy.