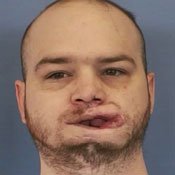 Attorney General Jim Hood this morning argued successfully in a federal appeals court in New Orleans to lift a stay of execution for Edwin Hart Turner. At this point, without further intervention by either the U.S. Supreme Court or Gov. Phil Bryant, Mississippi will move forward to execute Turner this evening at 6 p.m.

On Monday, U.S. District Judge Carlton Reeves issued the temporary stay to allow for an independent psychiatric review of Turner, something the Mississippi Department of Corrections had previously and successfully blocked. According to court documents, Turner, 38, has been mentally ill since adolescence. He attempted suicide twice, as did his mother. His severe facial deformity is the result of his first attempt in 1991, when the rifle he used slipped, and the bullet tore through his face instead of his brain.

"The Fifth Circuit Court of Appeals is not authorized to create special rules for death penalty cases to make it easier for states to execute prisoners," said Richard Bourke, Director of the Louisiana Capital Assistance Center (which represents Turner), in a release. "Our constitution requires us to have more procedural protections for prisoners facing death, not less.

"Despite the ruling of the district judge and a dissent from their own colleague on the court of appeals, two judges have decided that prison officials are allowed to interfere in Mr. Turner's clemency petition to ensure that it is less effective or compelling. That is not justice.

"The people fixing to execute Mr. Turner should not be allowed to hamper his lawyer's efforts to apply for clemency.

"We are asking Mississippi Governor, Phil Bryant, to enter an immediate reprieve of 30 days to allow time to fix Mississippi's broken and unfair clemency procedures. If the Governor is interested in a just and accurate death penalty system he should order a short delay and allow Mr. Turner the opportunity to present all of the relevant evidence in his clemency petition without the interference of prison officials."

Catholic Charities Inc. Office of Parish Social Ministry is holding a prayer vigil tonight at 5:30 p.m. in Smith Park, located at Amite and Congress streets, across from the governor's mansion. "This vigil grieves the lost lives of Mr. Turner's victims as well as the life taken by the State tonight," the organization's press release states.

Readers can contact the governor's office in support of Edwin Hart Turner's request for a reprieve and his application for clemency (changing his sentence to life without parole instead of death). Call 601-359-3150 or email [e-mail missing].

(verbatim release) Mr. Turner was represented by the Louisiana Capital Assistance Center. Following Mr. Turner’s execution, Richard Bourke, Director of the Louisiana Capital Assistance Center stated: The killings of Mr. Brooks and Mr. Curry that ultimately led to this execution were tragic and senseless and our thoughts should be with their families tonight as well as that of Mr. Turner. Most tragically, the deaths of Mr. Brooks and Mr. Curry were also avoidable. Mr. Turner was not a man with a criminal history. He was however a seriously mentally ill and tortured man who was well known to mental health authorities. The facts of this case show that our system of mental health care failed Mr. Brooks and Mr. Curry just as it failed Mr. Turner. Having accomplished Mr. Turner’s execution, an act that does nothing to prevent a similar tragedy in the future, the state of Mississippi must now shoulder its responsibility to do something positive and reform its broken mental health system. Mississippi must radically change the way that it deals with persons with serious mental illness both in the community and when they enter the criminal justice system. This case has highlighted Mississippi as one of a handful of rogue states who provide the least protection for the seriously mentally ill in their criminal justice systems. This needs to change. At the very least, seriously mentally ill offenders whose illness contributed directly to their crimes should not be subjected to the death penalty. The events in court of the last week highlight the need for immediate reform of the procedures adopted by the state of Mississippi to carry out death sentences. The unnecessarily short time period within which executions are scheduled in Mississippi and the restriction on the use by defense lawyers of mental health experts to assess their clients undermine the accuracy and legitimacy of the process. If Mississippi takes this country’s commitment to fairness and due process seriously, it will undertake immediate reform.

Ronni I commend you for taking the time to look at the WHOLE picture and the affects of neglecting someone such as Mr. Turner. Its pain staking to see people come in and out of facilities like as if they were cattle, with little if any real treatment to address the issues they face on a daily basis.

Thanks Duan. It seems to me that we warehouse and discard the mentally ill just like we do our children with zero-tolerance policies. It's not difficult to feel compassion for someone like Hart Turner when you know his history—the deck was stacked against him from birth. The story is not surprising, though it is sad. Turner's victims were also irreparably harmed due (at least partially) to a failure of our mental-health system. Their pain is great. But putting Turner to death doesn't provide closure, as the family of one of his victims stated yesterday. Taking a life for a life is a vengeful act and does not represent justice.