Diary of The Showstopper 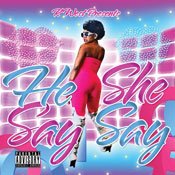 K West won Artist of the Year at the 2011 Mississippi Hip Hop Awards. She has a new album out.

Hip-hop artist Kimberly West came home one day in 2003, and almost as soon as she walked through the door, the phone rang. She didn't expect the bad news that came next.

"Your brother's been in a car accident," is what she heard. She went to the hospital and waited with family. The news didn't get better. Her brother died that day.

West wrote about the pain, confusion and loss of her brother and put it to a beat in a track, "I Didn't Know." It's included on her debut album, "He Say She Say," a collection she calls a diary of her life.

The entertainer, who goes by the stage name K West The Showstopper, grew up in Jackson. An alumna of Provine High School and Jackson State University, West got her start booking acts at her family's downtown Jackson establishment, West Restaurant and Lounge (3430 W. Capitol St., 601-948-7680). West then began singing, but a friend suggested she try rap. That's when West discovered that hip-hop is her true talent.

Released on the Jackson-based hip-hop label Optimo Palace and produced by Cory B and Juize Jackson, "He Say She Say" shows the true talent and swagger that K West possesses. The album, released Oct. 3, helped West win the award for Artist of the Year at the 2011 Mississippi Hip Hop Awards. While West wrote almost the entire album, she says it reveals heavy influences from Nicki Minaj, Drake, Lil Wayne and even Beyoncé.

"I'm not just a rapper," West says. "I'm an entertainer. Drake and Lil Wayne do amazing things lyrically, but Beyoncé is such a great entertainer."

West, 30, heavily promoted the album in recent shows at Club Rainz and Dreams JXN and has shows scheduled in St. Louis and Atlanta in coming weeks to draw a larger following. West is planning a fashion and entertainment extravaganza sometime this spring in Jackson that will not only feature Mississippi hip-hop artists, but give Jackson-based entrepreneurs in the fashion, design and beauty industry a chance to showcase their businesses and products.

"I want to give back to the community and give other artists and business people the same chance I was given to succeed," she says.

K West has struggled in recent months being a successful artist in a largely male-dominated genre. "I couldn't do it without the support of my family and the people at Optimo Palace. You see no females in the hip-hop shows across the South, and we are here to show that K West can be entertainment at its best."

"He Say She Say" is available for purchase on the Optimo Palace website (http://optimopalace.yolasite.com), coming soon to iTunes. View K West's videos at http://www.youtube.com/kwest0927.