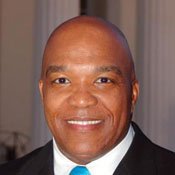 Zachery Williams does not want to discuss his age. He doesn't understand why people keep asking him something that to him just doesn't matter. Williams is one of 11 candidates in the Feb. 14 election to replace Kenneth Stokes as Ward 3 councilman. He was busy planning a campaign fundraiser at The Penguin when the JFP called and asked him, among other questions, how old he was.

"I'm a Jackson native," he said instead. "I went to McWillie, Chastain and Murrah. I went to Jackson State University." He was baptized at Greater Fairview Baptist Church. His flier says he got his master's degree in 2002 and his bachelor's degree in 1989. But he still wouldn't tell his age, even after learning other candidates freely gave the information.

A resident of the Broadmoor neighborhood, Williams is a managing partner with Claude-Zach Investments. He is the father of one son, Bradley, and engaged to Sirena Wilson. He is a member of Anderson Methodist Church.

Williams was a reserve police officer from 1995 to 2002. He is a businessman who owns Williams Janitorial and Cleaning Supplies. He's involved with several boards and charities, including the Farish Street Festival Board, and is a member of 100 Black Men of Jackson.

All that and running a campaign is demanding. He is canvassing businesses in Ward 3, looking for support. He said the Penguin fundraiser went well, and that 2011 gubernatorial candidate and Hattiesburg Mayor Johnny DuPree showed up to lend his support. He said DuPree supports him because he is a businessman.

"When we hear about Ward 3, the only area that most know about is Georgetown," he said. "Ward 3 is so much bigger than that."

With less than two weeks left before the election, Williams has to make himself stand out from 10 other motivated candidates. He took a few minutes to answer some questions during two short phone calls, but he had to get back to campaigning.

Why are you running for the Ward 3 council seat?
I would like to make a difference. I can provide better service than we have had in the past. We need someone who can communicate.

What do you want done about crime?
The city should identify crime and find out why we have such a high crime rate. We need better patrols in the area, a more visible presence and better lighting. Crime happens in the dark.

What would be your priorities?
Streets need priority. We have a problem with potholes. You've noticed? We need to address better representation when it comes to getting those things done, especially when it comes to the elderly. They should feel safe in their homes. We want kids safe walking to school.

Williams later sent a statement to the JFP via email that explained his views a little bit more on crime and other issues.

"It's not just the kids that are committing these crimes, it's people who have lost their sense of direction and purpose to become a productive citizen," he wrote.

"The citizens of each ward should also play a part of protecting themselves and being pro-active."