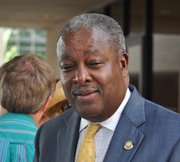 The Jackson City Council finally came to an agreement with the mayor to approve contracts with a financial advisory team for the city's water-system improvement project.

The contracts include $400,000 to hire bond counsel and financial advisers for the city's $90 million contract with Siemens Corp. Council members had refused to vote on the contract in its Economic Development Committee at two previous meetings. Monday, both the committee and the full council approved the contracts.

Councilmen Quentin Whitwell of Ward 1 and Frank Bluntson of Ward 4 said at previous meetings that they would not approve the financial advisory team until Mayor Harvey Johnson signed a contract with Siemens.

The Siemens-led project will include upgrades to the city's water-treatment plants, improvements to water pipes, installation of digital water meters, a new water usage tracking system and a new bill-payment system. Siemens has guaranteed the city that the project will pay for itself in long-term savings and increased revenue.

The city will need to sell bonds to finance the project in the short-term. Johnson said the city needs the financial advisory team to assure the bonds will be marketable before he signs off on the contract with Siemens.

Ward 2 Councilman Chokwe Lumumba said he was concerned that the city administration was trying to negotiate some of the subcontractors that Siemens hire. He agreed to approve the financial advisory team only with an amendment that all bonds come before the council for approval.

Bluntson, who was absent from both the Economic Development Committee meeting and the City Council special meeting Monday, had expressed concern about open-ended wording in the contract that allowed for financial advisers to charge the city for out-of-pocket expenses. Whitwell remedied that concern Monday by adding an amendment to cap those expenses at $5,000. Whitwell also included an amendment that will terminate all financial contracts if the city does not sign a contract with Siemens by Jan. 31.

The contract passed by a 3-1 vote with the amendments. Whitwell, Lumumba and Ward 7 Councilwoman Margaret Barrett-Simon voted for the contract. Ward 5 Councilman Charles Tillman was the lone vote against it.

LaRita Cooper-Stokes of Ward 3, Tony Yarber of Ward 6 and Bluntson were absent.

The city will pay $170,000 to Baker Donelson and Anthony Simon for bond counsel, $125,000 to Malachi Financial Products for financial advice and $100,000 to the Begley Law Firm and Betty Mallett for underwriting the bonds.

The U.S. Department of Justice pre-cleared the city's redistricting plan.

The pre-approval allows the city to plan next year's elections under the new ward lines.

The biggest redistricting change came in Wards 1 and 7. The Lefleur East neighborhood, bordered by Meadowbrook Road and Lakeland Drive to the north and south, and Interstate 55 and Ridgewood Road to the west and east, will move from its previous designation in Ward 1 to Ward 7. Ward 1 includes most of the city east of Interstate 55. Ward 7 includes Fondren, Belhaven and parts of downtown and south Jackson.