The Truth About Obamacare 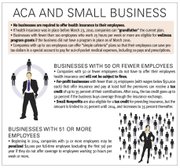 If you spent any amount of time listening to the nattering voices of the negative, chances are you've heard any number of rumors, lies and half-truths about the Patient Protection and Affordable Care Act, aka Obamacare or ACA. Allow us to help you sort it out.

Why is Health Care an Issue?

The U.S. spends more money per capita for health care than any other nation, yet we rank 37th in terms of outcomes: Life expectancy, and infant and maternal mortality are among the worst of all developed countries. Rates of obesity, heart disease and diabetes are epidemic.

In Mississippi, about a half-million people live without any health insurance, leaving them at risk for more severe, advanced-stage illnesses and catastrophic medical costs when the unexpected happens.

When large percentages of the population are unable to get basic, preventive medical care, it puts the economy and well being of the nation at risk. First, it's much cheaper to pay for preventive care than emergency care. Second, healthy citizens mean a more productive work force.

How Does Obamacare Help?

The Affordable Care Act attempts to establish minimum standards of health care for the majority of U.S. citizens, making preventive care--flu shots and pap smears, for example--available without deductibles, co-pays or co-insurance. It also reins in some of the harshest practices of the health-insurance industry. Under the law:

• They cannot charge higher rates to women and must eliminate annual and lifetime limits for coverage (where companies set a maximum dollar amount of coverage).

• Insurance companies can no longer cancel a policy because you get sick or make a mistake on an application.

• Parents can keep their children on their policies until they hit age 26.

• Many older Americans will see a substantial reduction in premiums as a result of changes.

• Insurers will be held to higher administrative standards. They must spend 80 percent of your premiums on health care, and proposed rate hikes of more than 10 percent are subject to new scrutiny.

With so many rumors out there, you'd think Obamacare was a mythical unicorn (or Bigfoot) instead of a law written on paper. Here are just a few of the myths spread about the law. Test yourself, then see the answers, below.

• No businesses are required to offer health insurance to their employees.

• If health insurance was in place before March 23, 2010, companies can "grandfather" the current plan.

• Businesses with fewer than 100 employees who work 25 hours per week or more are eligible for wellness program grants if the business did not have a program in place as of March 2010.

• Companies with up to 100 employees can offer "simple cafeteria" plans so that their employees can save pre-tax dollars in a special account to pay for out-of-pocket medical expenses, including co-pays and prescriptions.

Businesses with 50 or Fewer Employees

• Companies with 50 or fewer employees do not have to offer their employees health insurance and will not be subject to fines.

• For-profit businesses with fewer than 25 employees (with wages below $50,000 each) that offer insurance and pay at least half the premiums can receive a tax credit of up to 35 percent of their contributions. After 2014, the tax credit goes up to 50 percent if the business buys coverage through the insurance exchange.

• Small Nonprofits are also eligible for a tax credit for providing insurance, but the amount is limited to 25 percent until 2014, and increases to 35 percent thereafter.

Businesses with 51 or More Employees

• Beginning in 2014, companies with 51 or more employees may be penalized $2,000 per full-time employee (excluding the first 30) per year if they do not offer coverage to employees working 30 hours per week or more.