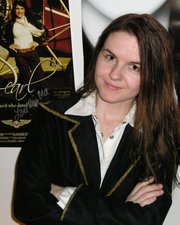 Producer Shari Goins says filmmakers will be running to turn in their films by the deadline.

The 48 Hour Film Project is no walk in the park. On the weekend of Aug. 17-19 when filmmakers gather in the capital city to participate in this exhaustive competition, they will have no idea what's ahead for them.

On the night of Aug. 17, representatives from each team will meet at the kickoff assembly at Sneaky Beans. Once there, each team will draw a genre out of a hat. Then, Shari Goins, producer for the competition in Jackson, will announce the one line of dialogue, one prop and one character name that must be in every film. At that point, the team representatives will call the screenwriters to give them the necessary elements, and the screenwriters will begin to write the films. Each film must be between four and seven minutes long when completed.

Filmmakers will enjoy no pre-production planning time for their films. Film crews make will make them up on the spot and finish within 48 hours. Sleep within those two days will be a rare luxury as film crews and editors often work around the clock. Finished or not, filmmakers must turn in the film at the drop-off deadline: Sunday, Aug. 19. Any late submissions will be screened, but will be ineligible for the prize.

"I will have a stopwatch counting down, and there will be people running to turn it in on time," Goins says with confidence.

Goins is a Friendswood, Texas, native. She says she got interested in film her junior year of high school "and never looked back." She received a degree in moving image arts from the College of Santa Fe (now Santa Fe University of Art and Design), and specializes in film editing. She moved to Vicksburg in late 2011 when her husband, who works with the Army Corps of Engineers, accepted a job there. Struck by the lack of film events in her new state, Goins took action.

"I decided there must be some filmmakers somewhere, so I emailed 48 Hour Film Festival and said I wanted to do the competition, and they said that would bring (filmmakers) out of the woodwork," she says

Native Jackson filmmaker Jordan Sudduth looks forward to the challenge. "It's going to be exciting. I went ahead and signed up the first day," the 27-year-old said. He realizes the obstacles in store for him and his crew. "It's going to be grueling," he says. "You have no time to sleep. I mean not one bit. But as soon as you finish, you can just go into hibernation."

While many other states have the 48 Hour Film Projects in several different cities, this will be Mississippi's first time to host the event. Introduction of the project shows growth for the state's nascent film industry. Incentives to film in the state are some of the best in the country, offering a 25 percent rebate for base investments in Mississippi, and up to a 30 percent rebate on payroll.

Goins agrees. She hopes to inspire more Mississippians to be interested in film as an art form and a potential career path. "People just think that film is just entertainment, the boob tube, whatever. But it can be so much more than that," she says. "I don't think there are many more forms of communication that can communicate so much so quickly. A facial expression can speak volumes that is so much more difficult to communicate via words."

Completed 48 Hour Film Project shorts will screen at Millsaps College Academic Complex (1701 N. State St.) Aug. 25 starting at 7 p.m. Tickets are $9 and are available online at jackson48hfp.bpt.me or at the door.