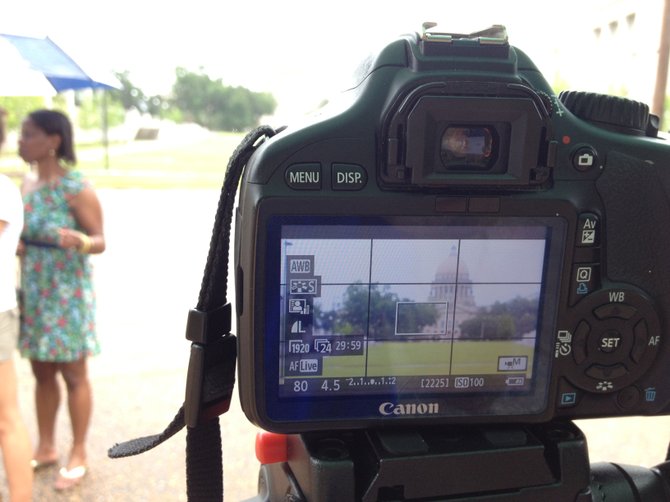 Actors wait patiently in the rain for their director to line up the perfect shot while filming a short movie for the 48 Hour Film Festival. Photo by Alec Martin

It is raining in downtown Jackson. The humidity is stifling and uncomfortably sticky even under a rain jacket, yet a film crew is hard at work in the middle of a deserted street. The Capitol building stands behind them, somewhat obscured by fog.

Complete with camera, sound men, a director and two straining crewmen with umbrellas shielding actors from the rain, this crew seems pretty legitimate, as if it were pulled off the sunny streets of Los Angeles. But there's something unusual about this film crew: All except one of them are teens.

Crewmen pull the umbrellas away, and dialogue starts up between the two lead actresses. It's the beginning of a long 48 hours for the Blu August film crew.

Aug. 17-19 marked the inaugural 48 Hour Film Project for Mississippi. In this grueling competition, filmmaking teams have 48 hours to create an original short film between five and seven minutes long. The other catch is they don't get to choose all of the elements that go into the creative process. For the 2012 project in Jackson, all films were required to include the same three elements: the character Roland or Rhonda Pettit (a mechanic), a wrapped gift as a prop and the line of dialogue, "Let me get this straight."

Furthermore, all the teams chose a genre at random. Genres ranged from horror, time travel and fantasy to film de femme and drama.

Though at least one member must be 18 or older, teams of all ages are invited to participate in the competition. It is unique opportunity for young filmmakers to show their colors, just one of the ways budding moviemakers can develop their talent in Mississippi.

Cameron Kitchens, 13, and her cousin, 17-year-old Kirsten Kitchens, have been working with film since a young age. "We were always doing film stuff when we were little," Cameron says. What started out as just entertainment for the family turned into a mutual passion. The Kitchens cousins entered a fantasy short film they shot in their grandmother's back yard, "Fire it Up," into the 2011 Crossroads Film Festival where producer of the 48 Hour Film Festival, Shari Goins, found out about them.

Goins later asked the youngest Kitchens to be the spokeswoman for young people wanting to join the festival. And to get their 48-hour film rolling, the Mississippi Film and Video Alliance awarded the girls a $500 grant—$125 to cover the entrance fee and $325 that they spent on editing software, Final Cut Pro, and other material to make their film possible.

At the kickoff for the 48 Hour competition, the cousins couldn't believe it when they pulled the horror genre.

"We were so glad," Kirsten says. "We were really hoping to get horror, that was one of our top choices. ... The women who plays the evil entity in the woods, our aunt Raven, we knew that she could be really creepy," Kirsten adds with a laugh. "So we knew if we got horror we could use her because she's really good at that kind of stuff."

Having the helping hand of a few adults behind them gave the girls a slight advantage. "Normally I would be really intimidated," Kirsten says of being so young among a group of mostly adults. "But we have had lot of experience, so that was good. My dad is a graphic designer so he knows a lot about that kind of stuff and what looks good."

Her father, Mark Kitchens, shot the film with an iPhone, and directed the girls, who played the two lead characters. "Our whole family is really creative," Kirsten continues, "so if we all sit down together, we end up thinking of something good."

Kirsten intends to pursue dancing professionally, and is already on the "pre-profession track," she says. But her cousin, Cameron, wants to chase a career as a filmmaker and a video game developer.

"Since the first grade, I always wanted to act," Cameron says "and then when we started directing, I really fell in love with that."

The youngest Kitchens has found her niche in the entertainment business.

"At first I felt like I had to earn respect from some of the other participants (in the 48 Hour Film Project) because they see us as little kids, but they're really nice people, and I really enjoyed talking to them about their experience. It seemed like somewhere I really belong," she says.

A State to Raise a Filmmaker

Mississippi is no Hollywood, but the film industry here is more developed than you might think. The Mississippi Film Office is constantly working on films both low-budget and blockbuster. Hinds Community College has begun a workforce training program to better supply our state with a knowledgable crewbase for filmmakers to utilize, and financial incentives such as tax breaks to film here are some of the best in the country.

To prepare Mississippi youth to come into a film-friendly environment Nina Parikh, manager of the Mississippi Film Office, started a program for kids interested in film. "I just got finished teaching two weeks in Canton at the Young Filmmakers Workshop," Parikh says.

"This is our tenth year to do that. And it's always full, always with a waiting list."

Canton is a popular filmmaking destination for Hollywood studios that want to shoot on location rather than on set. Movies such as "Mississippi Burning," "My Dog Skip" and "O Brother, Where Art Thou?" have all been filmed in and around Canton.

"We want to get Mississippi stories told by Mississippians," says Kristen Lucas, an instructor at the workshop. "We want the kids to start thinking about that and practicing filmmaking when they're really young, so that they can be the next big film producer in Mississippi. The best way to make the industry grow in the future is to go to the kids."

The workshop in Canton spans three days of filmmaking. Day one is for writing and storyboarding; on day two the kids shoot the film; and day three is for editing. "We do all the stuff you would do if you were making a film for real," 21-year-old Lucas says.

Group leaders help children from ages 8-18 through the entire process. The camp provides cameras, computers and software. The only items kids are asked to bring are costumes and a creative mindset.

A week after the 48-hour shoots wrap, the audience simply can't stay silent while the Kitchens cousins' film plays on the big screen in the Millsaps College auditorium. In less than seven minutes, the final product elicits a wider range of emotions than any other film on screen: laughter, fear, shock and awe.

After the screening, multiple viewers even assure the Kitchens girls that they voted for the cousins' film, "Again," for the Viewer's Choice Award. "I don't remember, when Kirsten and I started, if we were actually aiming to be where we are now. It's just like little girl dreams, you know? We started out with our family, and now we're on our own, and it feels really good," Cameron says. "We didn't think we'd get this far, but we did and I have a lot of faith in this."

At the end of the premiere, Goins gives a special thanks to the youth that participated in competition. A loud round of applause rings throughout the packed auditorium for some young filmmakers we'll certainly be hearing more of one day.

Correction: In an earlier version of this story, the writer incorrectly identified Ceili Hale as the director of the Blu August film team for the 48-Hour Film Project. Ceili was the production assistant. Kelly Buckholdt was the team leader of the Blu August team, E.J. Carter was the director of their 48-hour film "Turnaround" and Alec Martin was the assistant director, according to the film's Facebook page. The Jackson Free Press apologizes for the errors.