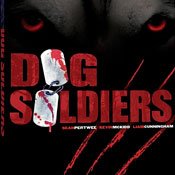 I've never been one to trick-or-treat or dress up for parties, but Halloween is the perfect time to switch off the lights, turn up the volume and sink uneasily into your favorite chair for a few terrifying hours of cinematic fright.

Have some friends over if you mustbut you'd best make sure they don't have any strange bites on their necks before you invite them inside.

A lot of films out there compete for your horror dime. Here are two of my favorites:

"Dog Soldiers" (2002) Rated R
Director Neil Marshall's breakthrough film is timeless. At its heart, "Dog Soldiers" is a lovingly rendered tribute to the bravado of classic '80s action movies, but Marshall also adds an affinity for the war films of the '60s and '70s, and an understanding of the grim and claustrophobic sentiments of "Night of the Living Dead" and "Assault on Precinct 13."

The British cast is relatively unknown to American audiences, but they deliver endearing performances as a squad of soldiers forced to do battle with a pack of ravenous werewolves in the thick of the Scottish highlands. These warriors are brave but human. I'll grant that they are one-dimensional, but they're still memorable and believable characters you can relate to, root for and mourn.

The costumes and copious gore effects are admittedly low tech, but they are effective and keep with the moview's decidedly old-school sensibility. A discernible, but perhaps indescribable quality to these handmade effects lends them more weight and reality than computer-generated trickery (despite the noticeable seams).

Marshall's screenplay stays true to the tenets of classic mythology while transporting its archetypal monsters to a modern, more cynical age. There are plenty of shocks and chills, but what really sets this film apart is its winking sense of humor.

"Dog Soldiers" knows its place, and it knows its audience. The script's tone is dark and unrelenting, and while at times it borders on the intentionally cruel, it never jumps off that precipice. The movie is certainly not as stark or nihilistic as the writer/director's more celebrated work, "The Descent." Here, Marshall manages to keep the film grounded despite its grisly trappings by filling the script with quick, quirky dialogue, and a hearty handful of cult references and quotes that are sure to make any movie nerd or horror geek smile.

"Quarantine" (2008) Rated R
Told through the lens of a local news crew, "Quarantine" follows a group of firefighters and police officers as they respond to a routine call from a dilapidated Los Angeles apartment building. A rabid infection quickly spreads, trapping the cameraman and a reporter in the middle of the deadly outbreak.

I know it's a gimmick, but something about this gritty and kinetic style of mockumentary filmmaking never fails to capture my imagination. "Quarantine" combines the vicious intensity of "28 Days Later" with the creepy verisimilitude of "The Blair Witch Project," but it surpasses even this cinematic pedigree to become arguably the most successful film in this growing niche genre. It's well structured, and the absence of an apocalyptic setting and overt political subtext actually makes it a bit more accessible than the average zombie film.

The first 20 minutes are spent establishing the characters and building their relationships, and while this section drags, it's nowhere near as long or as irritating as the corresponding sequence in "Cloverfield." I understand the need for this sort of thing, but here the acting feels a little forced, and most of the bonds formed in this short time quickly dissolve and come to naught as soon as the first infected body hits the floor.

Thankfully, the pacing picks up, and the performances, by a crew of actors whose names you don't know but whose faces you'll recognize, improve dramatically.

Jennifer Carpenter's turn as the earnest and intrepid reporter is particularly affecting. It's grimly chilling and genuinely heartrending to see her break down and give in to blind, blistering fear as the ropes of civilization snap and the chances of escape grow ever more remote.

Barring the necessary evil of its incongruous opening, there's a certain genius in the construction of "Quarantine," an almost mathematical precision to the lulls and crescendos as the film builds to its breathlessly frightful final movement. Those quiet moments are wrought with dread, full of an ancient and primal fear of what waits just outside the frame or what monstrosity might next emerge from the shadows. And when that tension finally, thunderously breaks, the filmmakers show the audience just enough to let us fill in the ghastly details.

If you believe a film should be designed like a symphony, then "Quarantine" may just be a masterpiece.

Will Morgan is never far from a screen and writes from Madison. Read more at http://www.parents-kids.com/media_m.